During the spring and summer of 2017, the Marseille city council approved a series of measures aimed at limiting the number of kebab shops in downtown neighborhoods. The city will draw from a fund of 1.5 million euros to take-over leases of empty storefronts and to hand-pick new businesses to open shop in the city center. According to city council member Yves Moraine, no existing businesses will be forced to close, only that moving forward, the city will prioritize high-end retail and “quality restaurants” over kebab shops (often known as les snacks) and other small businesses including family-run grocery and bric-a-brac stores. Such shops are often run by migrants from former French colonies, or by their children who were born in France. 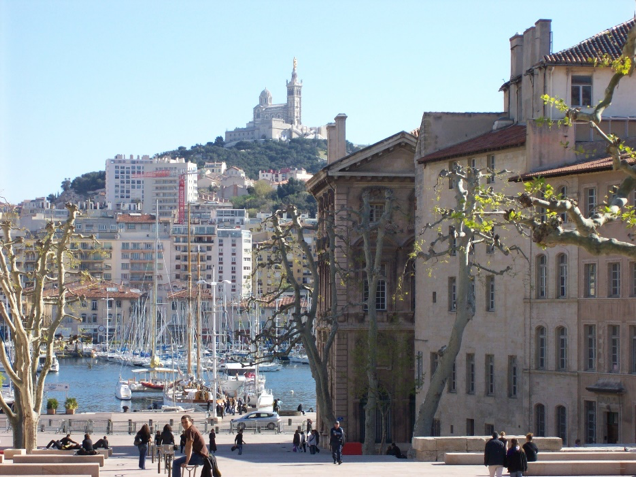 The Vieux Port, with City Hall in the foreground. Photo by the author.

The plan has been dubbed an “anti-kebab” campaign by the press and by some residents. As Rafik, 51, and Mostefa, 43 explained to a journalist reporting for the French newspaper 20Minutes, “This is a working-class neighborhood, the people here are poor. At a kebab shop, one can eat for only three or four euros.” Rafik and Mostefa live in Noailles, one of the neighborhoods targeted by the plan. This and other centrally-located districts are known for their rundown buildings and high-unemployment levels. According to these men, kebab shops are where “unemployed young people can find work…they open these shops and then they can employ the whole family.”

These same two residents, however, also echoed many of the concerns articulated by local officials and other business owners, namely that kebab shops “attract problems and aren’t really part of the identity of the city.” According to Rafik and Mostefa, “That’s why there should be fewer of them, so that the city can become cleaner, more orderly, and so that it can have a better image.”

This effort to eradicate kebab shops takes its cue from the seven billion dollar Euroméditerannée project which was initiated in 1995 with the goal to dramatically remake Marseille’s city center by renovating the waterfront, constructing luxury apartments, and attracting name brands like H&M and Starbucks. In many ways the Euroméd plan was an attempt to successfully conclude what many viewed to be a failed nineteenth century effort to Haussmannize Marseille, whose port district neighborhoods have long been home to primarily working-class, migrant families.

Rue de la République, one of the main boulevards targeted by the Euroméditerranée urban revitalization project. Photo by author.

But the anti-Kebab campaign and the Euroméd project also point to another significant history, one that has defined France in the twentieth century. Namely, they are part of the post-World War II effort to revitalize, reconstruct, and modernize the nation. Therefore, to fully make sense of these recent initiatives, one must situate them in the deeper context of twentieth-century debates about national belonging and the built environment.

My book, Native to the Republic: Empire, Social Citizenship, and Everyday Life in Marseille since 1945, explores the interrelated projects to develop welfare institutions and manage urban space in the five decades following World War II. It examines how expectations about decent housing and living standards came to be understood as social rights supposedly enjoyed by all citizens. It traces the evolution of these ideas by examining the everyday negotiations between ordinary people, municipal authorities, central state bureaucrats, elected officials, and social scientists in postwar Marseille. In doing so, it shows how these neighborhood-level interactions fundamentally informed evolving ideas about French citizenship and the construction of urban space.

Marseille, like other French cities (including Paris, Lyon, and Toulouse), became a vast construction site in the decades following World War II. These cities, like many European metropolises, were important spaces for postwar experimentation. But Marseille’s layered spatial history, a history shaped by migration and by empire, uniquely qualifies it as a contested and dynamic space for making sense of postwar reconstruction. As a port and the historical gateway to, and from, the colonies, Marseille is a city whose environment is critically produced by its position within an imperial network.

Marseille is thus a particularly significant site for exploring the construction of France’s postwar welfare state. From the mid-1950s through the early 1970s, a comprehensive system of public housing took shape as massive complexes known as les grands ensembles were constructed on the outskirts of most major French cities, including Marseille. Although many of these developments were hastily assembled out of prefabricated materials, they nevertheless symbolized something important to many families. Moving to a modern home became a marker of social mobility and an important indication that the welfare state was working.

Les grands ensembles to the east of downtown Marseille. Photo taken by author from the roof of Le Corbusier’s Unité d’habitation.

Although many working- and middle-class families were ultimately able to move into one of France’s many grands ensembles, the postwar project to construct housing en masse was uneven at best. During the economic downturn of the 1970s, some of the families that had originally moved to grands ensembles in the 1950s and 1960s began to move out of their now rapidly deteriorating apartments. And many families from former colonies as well as from France’s overseas territories and departments began to relocate to these complexes in areas increasingly referred to as banlieues. As the recession persisted into the 1980s, many in France also imagined immigration to be a problem and associated recent migrants living in rundown public housing with the perceived decline of French welfare institutions more generally. Despite the numerous issues plaguing France’s systems of social security, the banlieue and its residents came to symbolize broader concerns about the so-called crisis of the welfare state.

In Marseille, the banlieue is often imagined to extend from the north and east of the city right to its core near the old port. Unlike other French cities, many working-class migrant families continue to live downtown and much of the housing in neighborhoods such as Noailles remains dilapidated and overcrowded. Over the years, plans for the large-scale construction of housing have also included campaigns to gentrify downtown and to relocate these “troublesome” residents to other parts of the city. The campaign to ban kebab shops is part of this larger effort.

While conducting archival research in Marseille and nearby Aix-en-Provence last summer, I asked the owner of my favorite kebab shop in Aix, Le snack juste à côté, what he thought about Marseille’s ban. His shop was always packed and was popular with university students, with teenage boys, and with “Americans” as he put it. He had migrated from Tunisia, first settling in Marseille, and then moving to Aix to go to university. During the afternoons his wife, who wore a hijab, brought their two small children to the sweltering shop to say hello.  When I asked him about the ban he paused for a moment and then said, “Well, Aix has been doing this for years. You notice that my own shop is on the very outskirts of the city center. You won’t find shops like mine on the Cours Mirabeau [the main downtown thoroughfare].”

This kebab shop owner’s comments reveal how local policies aimed at policing urban space are also efforts to define who can help construct social space and, by extension, membership in the nation. As France and other European countries grapple with the recent influx of refugees as well as long established populations from former colonies, colonial and post-colonial migrants are finding ways to navigate the limits of citizenship and thus to articulate new understandings about belonging and the built environment.

Minayo Nasiali is an assistant professor of history at UCLA. Her work has appeared in the American Historical Review and the Journal of Urban History. In 2016, Cornell University Press published her book, Native to the Republic: Empire, Social Citizenship, and Everyday Life in Marseille since 1945. She is currently working on a new project on shipping and empire in contemporary France.

Like Loading...
This entry was posted in Article and tagged 20th Century, Europe, Migration, Spatial History. Bookmark the permalink.