In 1869, Buenos Aires was a small city of 178,000 inhabitants. Yet by 1914, it had grown to almost 1.6 million people and become the second largest city on the Atlantic coast (on either side). Much of this growth was fueled by the massive influx of immigrants, mainly from Europe but also from the Middle East and to a lesser extent South and East Asia. All told, from the early 1880s – when a broad wave of emigration from Europe began – and until the early 1930s – when the effects of the Great Depression took their toll on both Argentine immigration and the European outflow of transatlantic emigrants – more than 5.8 million people entered the country. 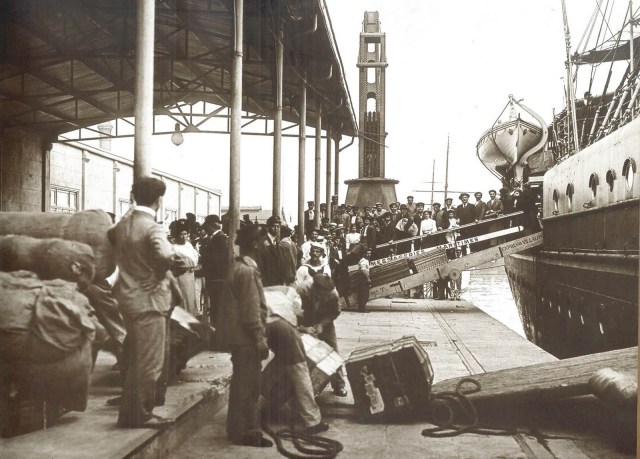 Arrival of Immigrants in the Port of Buenos Aires, 1904.

In 1910, 46 percent of the residents of the city of Buenos Aires were foreign nationals. Immigrants of many backgrounds in the city created ethnic institutions such as schools, hospitals, mutual aid societies, work placement agencies, charities, places of worship, restaurants, and social clubs. For many, it was an effort to maintain in Argentine society the cultural and linguistic pluralism that their own migration had created. In a moment when there was increasing pressure from the Argentine state and new nationalist forces to create a culturally homogeneous citizenry, the leaders of ethnic institutions promoted a pluralistic vision of Argentine belonging by insisting that it was possible to be both ethnic and Argentine.

The rapid population growth of Buenos Aires was accompanied by a number of urban transformations. New industrial-age infrastructure was constructed to order the emerging metropolis and facilitate movement within it. The first subway opened in the city in 1913, and it was the beginning of the twelfth-oldest underground rail system in the world and the first in Latin America. Other markers of urbanization could be seen, for example, in the creation of a municipal system of water and sewers, completed in 1886, and a widespread network of paved streets by the turn of the twentieth century. 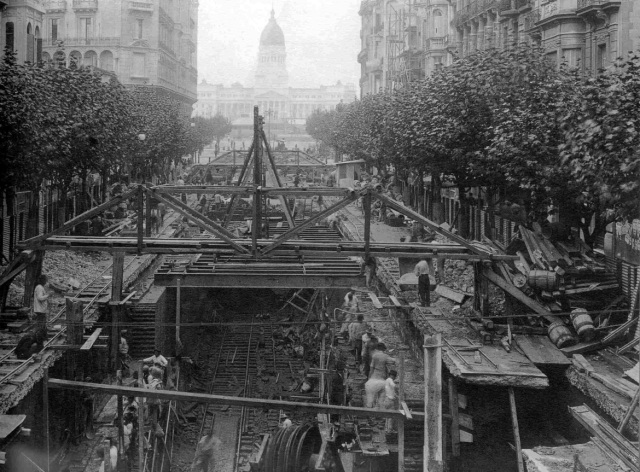 The expanding population and investment in new forms of transportation changed the layout of the city, contributing to the spread of new neighborhoods that streamed out from the historic center. Compared to U.S. cities in the same period, there was far less ethnic clustering in specific areas of Buenos Aires. The neighborhood of La Boca attracted Italian immigrants, Belgrano Germans, and Once Jews, but Italians, Germans, and Jews as well as any other group of immigrants could be found in neighborhoods across the city. Buenos Aires did not have a Little Italy nor a Little Germany in the same way that New York did.

German-language schools and churches in the city in 1914, to take just one example, could be found in the neighborhoods of Barracas, Balvanera, Belgrano, Palermo, Flores, Monserrat, Retiro, and San Nicolás, which meant that these institutions were near German speakers almost no matter where they lived in the city. The German Hospital, in contrast, was in Recoleta, near six of those eight neighborhoods yet in an area unto itself.

Ethnic communities across the Americas were often more a goal than a physical place, but even those aspirations were rooted in the bricks and mortar of ethnic institutions and something that shaped and was shaped by cities’ urban landscapes. In the case of Buenos Aires, a French, Galician, Italian, Jewish, Spanish, British, Syrian-Lebanese, and German Hospital could be found somewhere in the city, and those institutions also organized neighborhood clinics and traveling doctors for home visits. When possible and for graver issues, people chose to cross the city to receive medical services at a specific hospital in their native language. Dozens of bilingual schools – teaching in Italian, German, English, French, and other languages – as well as synagogues and churches of various denominations sprung up around the city. Unlike the large and centralized hospitals, these institutions often served one specific part of the city.

Gender and class hierarchies shaped the institutions of ethnic communities in Buenos Aires. The typically male-led community institutions fostered structures that created paternalistic relationships between wealthy and working-class immigrants and patriarchal hierarchies between men and women. With few if any exceptions, the leaders were also among the more affluent immigrants in the Argentine capital. Working-class German speakers who paid monthly membership fees to the German Hospital Association or working-class Italians who sent their children to Italian-Spanish bilingual schools rarely occupied leadership positions in these organizations, nor did the workers and the children who received the services from those institutions.

The goals and actions of immigrants to make communities in Buenos Aires also redefined what it meant to be an Argentine citizen. The role of affluent immigrants in the provision of social welfare services, the involvement of German-, Italian-, Polish-, and French-speaking Catholics in debates about secularization, the desire of Protestants, Jews, Maronites, and Muslims to make Argentina a more religiously diverse society, and the efforts of parents to educate their children in bilingual schools are all activities connected to people’s interest in citizenship. Despite their foreign birth and whatever their nationality, hundreds of thousands of immigrants in Buenos Aires felt that they belonged in the city, and they imagined their future there. They participated in the development of social practices in relation to both state authority and the other residents of the capital city, and they wanted to create ethnic communities that would become lasting components of Argentine society and the urban landscape of Buenos Aires.

Benjamin Bryce is Assistant Professor in the Department of History at the University of Northern British Columbia. He is the author of To Belong in Buenos Aires: Germans, Argentines, and the Rise of a Pluralist Society (Stanford, 2018) and co-editor of Making Citizens in Argentina (Pittsburgh, 2017) and Entangling Migration History: Borderlands and Transnationalism in the United States and Canada (Florida, 2015).