Transpatialization: A New Heuristic Model to Think about Modern Cities

How has the modern world been formed spatially? Historians have pored over that question for the last two hundred years. From the mid-nineteenth century and deep into the twentieth, many concentrated on nation-states; in the last few decades, globalization has been the name of the game. How do cities fit into these historiographic models? This question is critical for urban historians interested in more than “simply” intramural affairs. In 1998, Charles Tilly exhorted urban historians to pay more attention to “how big social processes interact with small scale social life.” As if in response, Andrew Lees and Lynn Hollen Lees noted that cities became a “‘third force’ in modern European society:” a key space linking individuals with nation-states. More recently yet, Jürgen Osterhammel has pointed out that in the rapidly globalizing nineteenth century, cities became ever more intensely hubs for state bureaucratic action, economic pivots, hot houses of knowledge, and centers of sociability. 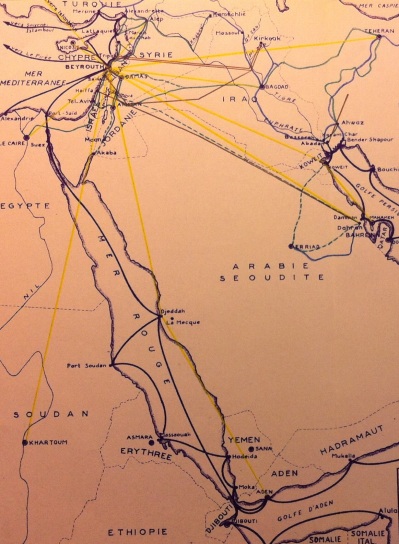 Beirut air connections in the 1950s.

My recent monograph, The Middle East and the Making of the Modern World (Cambridge, Mass.: Harvard University Press, 2017), builds on such views of cities as connectors and hubs – but also goes beyond them. It asks: How did the well-rooted cities and regions of the Middle East mold a dynamic modern world economy and powerful modern states? How, in turn, were those cities and regions remolded? And what does the Middle Eastern case tell us about the world as a whole?

The book’s point of departure is that the socio-spatial making of the modern world cannot be fully grasped by studying globalization or state formation or urbanization, and that no single one of these developments has been clearly dominant. Hence, neither has any single one been the socio-spatial marker of the modern world. This is not the least because these developments were fundamentally interlaced.

It is indeed the fact that cities, regions, states, and global circuits reconstituted and transformed each other much more thoroughly and at a much faster rhythm than at any other point in history, which is the socio-spatial trait of the modern world. I call that trait transpatialization. It is not one single process. Rather, it denotes a set of processes of socio-spatial intertwinements. Put differently, transpatialization is not an empirical unit, but a heuristic umbrella. Its use, by historians, makes sense for several reasons. It does not assign artificial primacy to any one presumably distinct scale like “the global;” its subject matter is not a particular city, global connection, or state, but intertwinement processes, for instance dual urban-national or triangular urban-regional-global ones; and, last, these intertwinements unfolded in tandem. In sum, transpatialization is an answer to the “real challenge” that global historian Sebastian Conrad recently identified: To “shift between, and articulate, different scales of analysis rather than sticking to fixed territories. . . In many cases,” Conrad added, “historians have opted for novel geographies, but in the end have tended to then treat these spaces as given.” 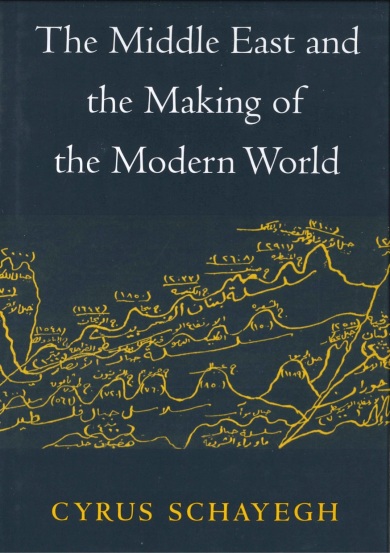 What does this mean for cities? Consider the Middle East and specifically Bilad al-Sham (Greater Syria), a region roughly coextensive with contemporary Syria, Jordan, Lebanon, and Israel/Palestine and home to age-old cities including Damascus, Aleppo, and Jerusalem. Conquered by the Ottomans in 1516/1517, its cities enjoyed considerable autonomy from Istanbul from the late seventeenth century. By the second third of the nineteenth century, however, a now quite firmly Eurocentric world economy and a more assertive Ottoman state became deeply enmeshed with that region and its cities. Seen from Bilad al-Sham, this reciprocal transformation had three linked socio-spatial dimensions that together made up the first stage of modern transpatialization.

First, cities were transformed. They grew; changed shape; became the centers from which Ottoman officials penetrated Bilad al-Sham; bred new, globally embedded collective identities; and some of their merchants tightened their economic grip on their hinterlands to offset the drawbacks of being incorporated into a Eurocentric world economy. At the same time, precisely because and as cities were transformed, they remained the very “building blocks of geographical imagination” of Bilad al-Sham’s inhabitants, the place to live the modern world. Second, interurban ties tightened. Especially port and interior city pairs, for instance Beirut and Damascus or Jaffa and Jerusalem, drew closer, partly due to improved roads and new railways and telegraphs. This cemented social ties and channeled Eurocentric world trade to the benefit of local merchants, some building transnational family networks. Third and last, Bilad al-Sham as a region became more integrated, though no single city – not even the region’s rising star, the global port-city of Beirut – could dominate all others.

These three linked processes survived the Ottoman Empire’s dismemberment in 1918. In fact, they deeply shaped the embryonic nation-states of Lebanon, Syria, Palestine, and Transjordan as well as European imperial administrations and global networks operating within them. In turn, cities and their interurban ties were reshaped, as was the region. The resulting parallel socio-spatial intertwinements constituted the second stage of modern transpatialization.

One intertwinement pattern that prominently involved cities was dual. Cities had to adapt to the birth of new nation-states, which became a crucial new framework for how they functioned, saw, and marketed themselves. Cities were “nationalized,” as it were. But vice versa, because there was more than one powerful city in each of the four new nation-states, the latter were de facto “urbanized.” Not by chance, Aleppo and Tripoli were called the northern capitals of Syria and of Lebanon, respectively, and some Arabs called Nablus, whose dwellers were proud of their political activism, Palestine’s capital.

Excerpt from the diary of Jerusalemite Khalil Sakakini, written during a year-long stay in New York in 1908, in which he describes his recurring dreams of Jerusalem, including dream voyages there.

A related, though distinct intertwinement pattern was triangular: urban-national-transnational. In order to carve out their space and prove their relevance within “their” new nation-state, cities sought to use, promote, and highlight transnational ties beyond their nation-state. Thus, the hymn of the Homs National College, founded in 1923, proclaimed “The repute of this house of science / reaches as far as the horizons / to Palestine and Egypt / and to the people of Iraq / and the people of Lebanon and Syria / have a friend / in you, oh Homs.”[i]

Two kinds of transnational ties existed, to be precise. Some were old, had been transnational/trans-imperial already before 1914. Such ties were entertained by, among others, cities with a long-distance trade role like Aleppo and, from the 1800s, Beirut; cities tightly linked to overseas diaspora communities; and cities of import to the Islamic world, most importantly Damascus, the capital of Islam’s first, Umayyad, dynasty (661-750). Other ties were new: late-Ottoman-time interurban, region-wide, and urban-hinterland ties that became transnationalized when Bilad al-Sham was quartered in 1918. Damascus’ hinterland, for instance, was divided between, not only, southern Syria, but also southeast Lebanon, northern Palestine, and northern Transjordan. Transnationalization worked the other way around, too, however. New(ly) transnational(ized) ties straddling the borders of Bilad al-Sham’s new countries had a transnationalizing effect on those countries and their overlords. A case in point is Paris and London’s decision, in 1921, to turn French Mandate Lebanon and Syria and British Mandate Palestine and Transjordan into a customs-free zone in order to deal with the massive degree of late-Ottoman-time economic ties across those countries.

A last type of socio-spatial intertwinement that prominently involved cities was quadrangular. A few cities used their regional centrality in Bilad al-Sham to maximize their position vis-à-vis not only “their” new nation-state but also their new European ruler. Foremost examples were Beirut and Haifa, the cities in whose infrastructural connection to the outside world – rail, road, port, airport, and oil terminus – France and Britain, respectively, invested most in their A Mandates. Rather than free agents, Paris and London for all matters and purposes were forced to choose those two cities; the late Ottoman Empire had paved the way by investing in these cities and allowing others, including European capitalists, to do so as well. In result, interwar Beirut and Haifa were the two primary global trade ports for Bilad al-Sham, with connections all the way to Iraq and Iran. From the 1940s to the 1970s, Beirut’s radius would reach into the Arabian Peninsula. Moreover, both cities were important to the French and British imperial economic and military strategic posture in the Eastern Mediterranean.

What overall conclusions can we draw from these points? The structure, function, and meaning of cities, regions, states, and global circuits change hand-in-hand; none can be clearly delimited in space or by function. Also, in modern times the rhythm of change has been faster than before. Characteristically, in the Middle East transpatialization experienced two stages, Ottoman and post-Ottoman, from the mid-nineteenth to the mid-twentieth century; moreover, both stages had distinct phases. Moreover, relations between the urban, the regional, the state, and the global are not a zero-sum game; for instance, a more intense presence of state power in a city did not equal “less city.” Hence, we behold many mutually transformative dual relationships as well as a wealth of triple and quadruple intertwinements. As cities, regions, states, and global networks are not mutually exclusive, but enmeshed, change in one affects all.

Last, it does not really make sense for historians to explicitly choose or implicitly accept any one socio-spatial field like “the nation-state” as the “ground floor,” as it were, of their narratives, “below” and “above” which are local and global (and regional and imperial) floors. The same goes for making “the global” one’s ultimate yardstick. No such hierarchy exists, as geographers have long recognized. And just as these socio-spatial fields are innately intertwined, so must be their histories.

Cyrus Schayegh was Associate Professor at Princeton before joining the Graduate Institute in 2017. His most recent books are The Middle East and the Making of the Modern World (Harvard University Press, 2017) and The Routledge History Handbook of the Middle East Mandates (Routledge, 2015), co-published with Andrew Arsan. He is currently working on four projects: “Globalization Meets Decolonization: The Urban Linkage, 1940s-1970s,” focusing on Beirut, Dakar and Singapore, “‘Anti-Geneva:’ Interwar European inter-Imperialism,” “Fundamental Historical Questions,” and “Arabic Analyses of Decolonization in Africa and Asia.”