It was, on the face of it, an unremarkable event. In the spring of 1989, a single-room-occupancy hotel and beer parlor was torn down in North Vancouver, Canada, and a new condominium tower was then put up in its place. Exemplifying the development model of the neoliberal city that time and again has seen the destruction of affordable housing in favor of pricey investment property, the residents and patrons of the St. Alice Hotel were displaced to make way for the Observatory, a luxury residential high rise.

The demolition of the St. Alice was more than just another moment in the Vancouver region’s steady advance toward a residential polarization understandable only in reference to market relations. This hotel’s rise and fall also evokes the settler colonial structure of North American cities. Reports of the ever-intensifying inequality of cities like Metro Vancouver now seem to come in by the day, but I want to suggest here that the example of this one unexceptional building renders more concrete the broader argument that coming to terms with the neoliberal city’s colonial dimension is key to understanding and contesting the outcomes of contemporary gentrification. In the process of this brief consideration, I hope to contribute to scholarly efforts to bring analyses of neoliberalism and settler colonialism into greater conversation. While some studies have alluded to colonial reverberations and metaphorical resonances in the neoliberal present, my hope here is to draw more attention to actually existing historical overlap, to displacement’s structural continuity.

As a potent symbol of settler colonialism at the city level, the St. Alice emblematized different phases of colonial and capitalist development upon its construction in 1912 and demolition 77 years later. Built near the waterfront in North Vancouver, which lies just across the Burrard Inlet from Vancouver’s downtown, the hotel was, in its early years, the brickwork pride of wealthy colonial moderns on land that was part of sovereign Squamish Nation territory. With 70 rooms, a dining hall, banquet room, lounge, and other facilities, in its early days the St. Alice was the most impressive and imposing building on Vancouver’s north shore. 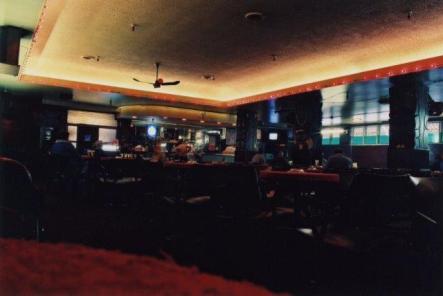 For Indigenous peoples in North Vancouver, legal regulation facilitated dispossession. Canada’s Indian Act, first passed in 1876, controlled every aspect of Native life, including leisure time. Before 1951, Indigenous people in Canada were legally prohibited from purchasing alcohol. Long after that, many private clubs and government-controlled liquor stores excluded Indigenous patrons by regulation, and many more offered an unwelcoming atmosphere by custom for all but white clientele. During and after the 1950s, beer parlors such as that of the St. Alice, then, were among the few places where Indigenous people could socialize in a licensed environment.

The evolution of the St. Alice was also the result of transformed economic relations in North Vancouver. By the mid-twentieth century, the first wave of capital accumulation through primary resource extraction had run its course and the waterfront became lined with large industrial shipyards. In this context, the St. Alice became a place of residence and recreation for working-class and poor locals, both Indigenous and non-Indigenous. 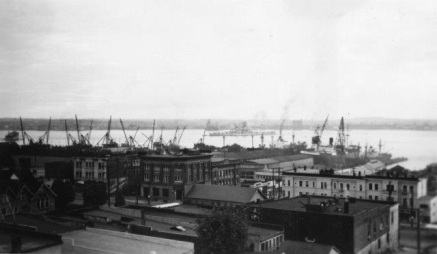 View from the St. Alice, 1946 (North Vancouver Museum and Archives)

By the 1970s, North Vancouver’s industrial economy was in notable decline, and by the 1980s British Columbia was caught in the grips of a recession. Since the solution to the economic downturn would be found in part through the speculation of property already accumulated by settlers through colonial means, the St. Alice’s days became numbered. Although it remained a means of affordable housing and a community gathering space for those who spent time there, many factors mitigated against the hotel’s survival. The land it sat on, which overlooked Burrard Inlet, was increasing in value as Metro Vancouver’s now-famous gentrification got underway. St. Alice residents, many surviving on social assistance, generated little wealth for local elites. The neighborhood in which the St. Alice stood had been subject to an ongoing media campaign that emphasized dereliction, delinquency, and decline. And the St. Alice’s days were numbered because it had become so known for its beer parlour, whose clientele consisted of the last of the shipyard workers from an industry closing up shop, residents of the local public housing project located on the adjacent bloc, and members of the Squamish and other First Nations. In a tragedy without farce, where Indigenous territory had once been expropriated to build the St. Alice in 1912, in 1989 Native space was requisitioned to make way for the Observatory.

After the owner of the St. Alice received an offer for the property, city councillors agreed to let the sale and demolition proceed, and once the St. Alice tenants were issued eviction notices, a motion to consider emergency housing for those thrown out was unable to pass in council. The wrecking ball took aim at the St. Alice in the spring of 1989, and the Observatory was later put up in its place. Few people seemed to notice.

The story of the St. Alice is about more than the career of capitalism in the city. Built on unceded Squamish territory, and known in its later decades as a site of Indigenous congregation, the hotel ultimately intertwined settler and Indigenous histories with histories of urban neoliberalism. Demolished in a year best remembered as one of great global change represented by the fall of the Berlin Wall, the history of the St. Alice underscores the continuity of the settler structure throughout and beyond the twentieth century. The history of this building, then, has something to teach us not only about capitalism and contemporary gentrification, but about the racial and colonial structures that determine how class is lived in Canada and beyond.

John Munro teaches US and international history at St. Mary’s University in Halifax, Canada. The author would like to thank Glen Coulthard, Darryl Leroux, and Ingrid Waldron for bringing their sharp insights to earlier versions of this post, and Mike Krebs for his very valuable research assistance.