Urban Renewal and Displacement in Soviet (and Post-Soviet) Moscow

On May 14, 2017, over ten thousand people joined together in Moscow, Russia, to protest the proposed demolition of entire blocks of Soviet-era apartment buildings. The buildings under threat are a distinct type: five-story prefabricated structures built during the Khrushchev era in leafy suburban districts outside the city center. Now, a new law—proposed by the Moscow mayor earlier this year and signed by Russian President Vladimir Putin on July 1—aims to rid the Russian capital of its “Khrushchevki” by demolishing some 4,500 buildings and replacing them with modern high-rises. The 1.6 million Muscovites currently living in these buildings are to be relocated to new high-rise units of “equivalent” size elsewhere in the city.

Demolition of five-story Khrushchev-era building in Moscow in 2008.

When they gathered this past May to protest this so-called “renovation law,” residents expressed their frustration with the city’s refusal to recognize property rights and with the official line that the city’s prefab housing is derelict (as one sign put it: “We are against the demolition of not dilapidated housing!”). Some suggested that it is not their neighborhood but the Russian government that is in need of “renovation.” Protests erupted again on June 28 when the parliament passed the controversial bill. And when Putin signed the bill into law a few days later, residents responded by challenging it in Russia’s Constitutional Court.

Clearly, the implications of these events stretch well beyond the realm of housing. Members of Russia’s political opposition have joined residents on the streets, but the movement against demolition is not led by politicians. Those fighting against demolition are ordinary citizens. As Alexander Baunov wrote in his coverage of the May protest in Foreign Affairs, “the rallies revealed something new in Russia: a nascent civil society of well-organized people who have found a common interest and are fighting fiercely to defend it.” This grassroots activism makes use of social media and letter writing campaigns. To Baunov, it looks distinctly “European.” By contrast, the Russian state’s approach to urban redevelopment is seen as distinctly “Soviet,” harkening back to large-scale city planning schemes of state socialism.

In fact, there is nothing distinctly “Soviet” about a state using its powers to seize property under the guise of urban renewal. In the United States, for example, the Housing Acts of 1949 and 1954 directed federal funding toward “slum clearance” and other urban renewal projects. What is happening in Moscow today closely resembles the kind of private-public partnerships formed in the postwar U.S. that tore apart neighborhoods to build freeways and “rejuvenate” city centers. If there is one group in Moscow sure to benefit from the “renovation law,” it is private developers.

There are strong comparisons to be made between Moscow’s current urban regeneration plans and similar projects underway around the world, from Shanghai to London to Mexico City. But there are also commonalities to be found in events in Moscow’s own past. The grievances and frustrations expressed by Muscovites today are reflected in a much longer history; the signs and voices of those out on the streets these last few months echo the voices and writings of generations past. 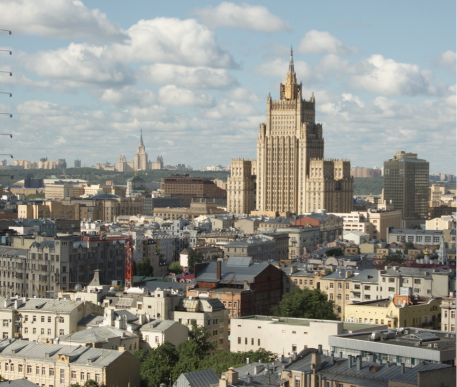 Two of Moscow’s Stalin-era skyscrapers: the Ministry of Foreign Affairs and Moscow State University in the distance. Photograph by Anna Anichkova, 2011.

My research looks at a large-scale building project undertaken in Moscow in the late 1940s and 1950s. The project began in 1947 and it saw the construction of eight skyscrapers in the Soviet capital, though only seven were built to completion. This Stalin-era renovation project aimed at transforming Moscow into a world-class capital city worthy of its status as center not just of the Soviet Union, but of an expanding socialist sphere. Stalin-era planners looked to foreign, capitalist cities for inspiration, all the while vowing to out-do “the West” at its own game. As Stalin reportedly put it in 1947, “people go to America and they return in amazement, saying ‘oh what enormous buildings!’ Let them come to Moscow and see what buildings we have here—let them marvel at the sight of them!”[1]

This Cold War imaginary would shape Soviet urban development for decades to come. But back in 1947, before Moscow’s skyscrapers could serve as beacons of socialism and as models, in their own right, for socialist urban development abroad, the plots chosen for their construction had to be cleared. In this process, tens of thousands of Muscovites were displaced from their homes.

In a scheme similar to that undertaken in Moscow today, Soviet officials of the late 1940s pledged to rehouse displaced residents in newly-built housing. Stalin-era residents reacted to this forced resettlement in varying ways. Resettlement offered an escape from dire living conditions many suffered in their existing housing, but the new residential districts built for resettlement were not well situated. While the plots chosen for skyscraper development were mainly located in the city center, most housing built for those displaced was located beyond city limits. Residents who had lived their lives as urbanites were hardly eager to leave the city. How would they get to work? Would there be enough goods and services? How would their children get to school?

The Zariad’e in the early 1940s before skyscraper redevelopment. See this and other photos here.

A group of residents living in Moscow’s central Zariad’e district, not far from the Kremlin, wrote a collective letter complaining about the situation to Stalin in 1952. The skyscraper planned for the Zariad’e (a structure never completed) was already under construction by 1952, but these neighbors had yet to be resettled. Their letter described the worsening living conditions they faced as they were forced to remain in apartments located directly on the construction site. But while these residents pleaded for faster resettlement, they also objected to being resettled to the outskirts of the city and pressed for new housing in central Moscow.

This collective appeal made its way, as many similar letters did, to top officials who sent it down the chain with instructions, in this case to a state procurator, who was told to “investigate and take action.” Within a month, an investigation found that those residents of the Zariad’e were indeed living in unsanitary and unsafe conditions. They would be resettled within a few months, though not to the centrally-located housing they desired. Instead, these neighbors ended up west of Moscow in the district of Kuntsevo. There, they lived alongside skyscraper construction workers who had themselves been relocated to the capital region. Hundreds of similar letters were written by residents whose lives were also caught up in Moscow’s Stalinist redevelopment scheme. Some letter-writers saw their appeals satisfied by state officials willing to help; others did not.

As Muscovites today try to make sense of their lives and their futures amidst the latest round of demolition, some recall a longer history of state-driven displacement. “They are forcing people out, like under Stalin,” one activist said earlier this year. Indeed, and like under Stalin, Muscovites are not going quietly along with the plan.

But there is a global element to this story as well. Urban redevelopment projects, wherever they are carried out, have long-lasting effects on local populations. These projects have a tendency of introducing into city planning an often unbridgeable divide between the symbolic needs of political actors and the functional needs of urban life. These projects also raise questions about who belongs in the city. Residents share common experiences of displacement across different eras, places, and political systems—experiences that are as global as the city itself.

Katherine Zubovich is Assistant Professor at Ryerson University in Toronto. Her research focuses on urban life and city planning in the former Soviet Union. She is currently working on a book about Moscow’s Stalin-era skyscrapers. She holds a PhD from the University of California, Berkeley.