Cairo, Berlin, and the Compartments of Urban History

Around 1900, contemporaries in Cairo and Berlin made remarkably similar arguments about the effects of urban change on city dwellers. A variety of actors from journalists and psychologists to police officers and city clerks portrayed entertainment districts in the two cities as having a problematic effect on emotions. They depicted the neighborhood of Azbakiyya in Cairo and the area around Friedrichstraße in Berlin as reducing people’s ability to control their feelings. My recently published book Emotional Cities: Debates on Urban Change in Berlin and Cairo, 1860-1910 examines these arguments. In it, I ask what historians can deduce from the similarity of arguments about urban change in these two geographically distant cities. 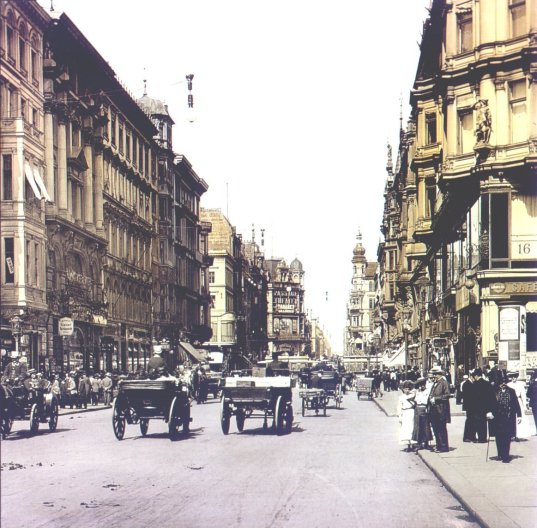 Between 1860 and 1910, Cairo and Berlin underwent a tremendous transformation in terms of their populations, cityscapes, and social compositions. Authors in both places started to portray these changes as affecting city dwellers’ emotions shortly after the middle of the nineteenth century. Various observers described activities such as newspaper reading, dancing in dance halls, and strolling through city streets as transforming people’s rationality, love, disgust, anger, or fear. Around 1900, these claims began to concentrate on recently built entertainment districts that were located in the centers of the two cities. In the Egyptian capital, the neighborhood of Azbakiyya was increasingly associated with a loss of “rationality” (‘aql). Authors in Berlin saw the area around Friedrichstraße as making men lose control over their emotions. Building on these arguments, a number of texts suggested that suburbs offered a solution for the problematic emotions of urban dwellers. At a distance from the city center, they claimed, urban dwellers would regain a strong rationality and control over their feelings. These arguments ultimately helped the spread of newly built suburbs, such as Lichterfelde in the German capital or Helwan in the Egyptian capital, which mushroomed around Berlin and Cairo in the years leading up to the First World War.

View of the Cairo suburb of Helwan at the end of the nineteenth century. From the Library of Congress.

From the first association of urban change with a transformation of people’s emotions to the rise of suburbs, debates in Cairo and Berlin followed a parallel trajectory during the second half of the nineteenth century. Contemporaries in both cities stressed the role of the natural sciences for the conceptualization of emotions. Older concepts such as Sitte in German or ‘aql in Arabic were infused with a transformed meaning that drew on such disciplines as medicine, physiology, and neurology. The analysis of actors who made claims about emotions in the two cities further highlights that these debates reflect a parallel social history. In Cairo and Berlin, a specific group of middle-class men was at the forefront of formulating arguments about emotions in the city. These men were often employed in similar professions, working as journalists, medical doctors, or clerks. In addition to pointing to this corresponding class formation, contemporary debates also underscore the importance of nationalism in both cities. Middle-class authors in Berlin and Cairo described city dwellers whose emotions had been affected by urban change as the opposite of the ideal citizen of the German or the Egyptian nation. Instead of emotionally-torn, passionate urban dwellers, these authors stressed the need for calm and rational citizens if the nation was to prosper. 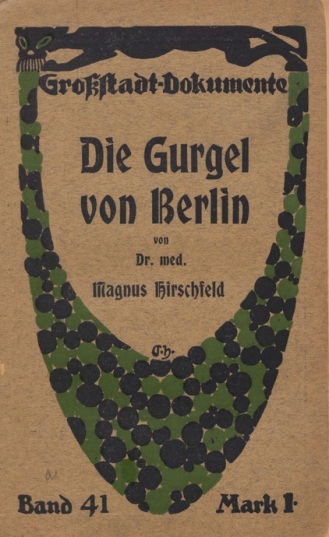 Cover of a book published in 1905 in the popular series “Großstadt-Dokumente” that discussed urban change in Berlin.

In my book, I argue that these similarities provide a new insight into global urban history. The histories of Cairo and Berlin traditionally belong to two distinct historiographies. Scholars have usually portrayed the German capital’s past as part of a German or European story, while historians working on Cairo have tended to situate the city’s trajectory in the context of histories of Egypt, the Ottoman Empire, or the Middle East. This separation reflects a regional compartmentalization, which is at work in urban history at large. The Oxford Handbook of Cities in World History , for instance, is mainly structured along the lines of categories such as “China,” “Europe,” “Middle East,” “Latin America,” “North America,” “Africa,” and “South Asia.” This kind of approach has produced pivotal studies of cities’ past. At the same time, however, scholarship that is based on the idea of neatly bound areas of the world or “civilizations” risks overlooking phenomena that cut across these spatial compartments.

Emotional Cities probes the separation between European and Middle Eastern urban history by comparing debates in the German and the Egyptian capitals during a period of increased transformation in both places. Much like in other fields of research, the fault line between Europe and the Middle East has been influential for the conceptualization of urban history. The argument that “the Islamic City” is fundamentally different from “the European City” continues to inspire scholars reflecting on the specificity of cities in Europe. Historians have argued, for instance, that a specific use of public space would set European cities apart from their Middle Eastern “other,” thus providing coherence to the idea of a common urban history of Europe. But does the separation between Middle Eastern and European urban history hold once historians compare distinct phenomena across the gap separating the two?

In this context, the focus on debates about urban change offers the distinct advantage of moving away from the question of origins that haunts comparative urban history. Scholars have offered a myriad of arguments about where a specific technology was first invented, a certain argument formulated, or a governmental technique originated. Recent studies in the history of technology and intellectual history have shown, however, that considering the adaption of concepts, practices, or technologies as an innovation in its own right offers the possibility of analyzing histories of non-European settings as more than simply stories of lack, copying, or diffusion from “the West.” In my book, I expand on this argument. Rather than searching for the geographical origins of changes in the urban realm, Emotional Cities zooms in on the ways in which contemporaries in Berlin and Cairo negotiated urban change.

The debates about urban change in Berlin and Cairo ultimately reveal how dynamics of class formation, the spread of the natural sciences, and the rise of nationalism contributed to very similar arguments in both places. In this way, the phenomena presented in Emotional Cities do not reflect two separate stories; they highlight that the compartmentalization of nineteenth-century urban history along the lines of distinct “civilizations” does not hold. Instead, the debates in Cairo and Berlin shed light on potentially global forces, such as capital and empire, which fueled phenomena like class formation and nationalism in the two localities. These forces were hardly restricted to separate spatial units, as they shaped the trajectory of a number of cities in Europe and the Middle East during the second half of the nineteenth century.

Joseph Ben Prestel is assistant professor (wissenschaftlicher Mitarbeiter) of history at Freie Universität Berlin.  He is the author of Emotional Cities: Debates on Urban Change in Berlin and Cairo, 1860-1910 (Oxford University Press, 2017).