From Rural to City Dwellers: A New Book on Indians in Kenya

Indians have contributed to Kenya’s multiracial tapestry for centuries. At Independence, Indians constituted two percent of the population and formed its petty bourgeoisie. By 1968 Kenya hosted over 170,000 Indian residents. Occupying key roles in the economy and civil service, Indians played no small part in the twentieth-century history of Kenya. Yet, as Sana Aiyar argues in Indians in Kenya: The Politics of Diaspora, an overwhelming emphasis placed on singular territoriality, coupled with the racially bounded nature of scholarship on Kenyan nationhood, has resulted in the historiographical marginalization of Indians, who are assumed to be historically insignificant (p.2).

Concerned with constructions of immigrant identities, Aiyar navigates the Indian Ocean world in order to disentangle the various narratives of people, place, and movement. The overarching thesis of this compelling, well-researched, and propulsive book is that diasporic populations have multiple homelands: these can be civilizational and/or territorial. As such, it interrogates the emergence of Kenyan Indian diasporic consciousness between 1895 and 1968, and traces its attachments to its civilizational homeland, India, within its territorial homeland, Kenya.

This book therefore unpicks the in-between spaces that connect various civilizational and territorial homelands. The picture that emerges is one of paradoxical claims to racial solidarity and difference (p.20). Aiyar shows that just as there were instances of interracial anticolonial activism, so too existed Indians’ sub-imperialist colonizing ambitions that were tinged with racial prejudice. Equally, in one of the most interesting sections in the book, where Aiyar takes into account ambivalent responses to the Mau Mau Rebellion, the author examines what lies between unity and tension. On settler politics and resistance, she sets out that this is a story of the success of Indian-African solidarity as well as the friction of racial hierarchies, which were two sides of the same coin (p.21).

Aiyar does not propose an overly simplistic, teleological narrative. Indeed, this antidote to methodological nationalism does not treat India and Kenya as disparate geographical regions. Being Indian and Kenyan was above all a process of selection and exclusion where competing and contradictory claims were fashioned. In this way the recasting of diasporic narratives, so expertly handled by Aiyar, exposes a complexity in the struggle for belonging and meaning.

What does this mean in terms of global history? One of the many strengths of this book is its ability to rethink or reimagine local spaces in their global and transnational contexts.  We have heard much about “global localism” (Harvey and Jameson) in relation to the development of global capitalism, but less attention has been paid to the connections and, more importantly, individual agency involved in this age of globalization and mass movement. Forces of globalization, like immigration and global civil society, challenge historians to find new ways of understanding historical interdependencies. Aiyar’s blazing brilliance finds an original and insightful way of doing so. 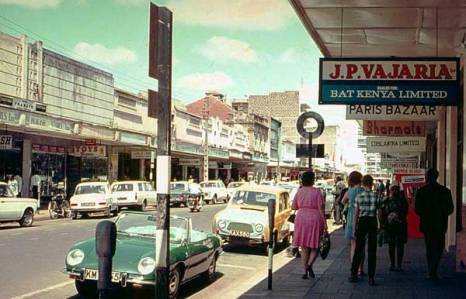 Her focus on interactions between colony-colony rather than colony-metropole is also novel. Following in the direction of Arjun Appadurai, as well as more recent offerings such as Andrew Arsan’s Interlopers of Empire, Aiyar challenges the center-periphery model by mapping how migrant populations live in various nation-states at once. In this way, this book not only expands our knowledge of the complexities of the colonial relationship, but it encourages a more expansive understanding of the component parts of Britain’s overseas empire.

On a micro-level, its examination of urban life is productive. Much like James Brennan and Jonathan Glassman, Aiyar explores the ways in which urban spaces can be used to understand racialized lifeworlds. Tracing the transformation of agriculturalists to urbanites, Nairobi, a popular area of South Asian settlement, is used by Aiyar to understand the convergence of urban discontent and socio-cultural politics. Aiyar concludes on how daily interracial interactions in “urban spaces of intimacy” reflected racialized political rhetoric. The local is used to frame notions of the national in that trade, business, and colonial resistance are all assessed within the framework of distinctly trans-local elements.

In sum, few academic contributions so elegantly trace the simultaneous transnational terrain of cross-cultural politics and the national and local terrain of interethnic and intercultural interactions quite like Sana Aiyar’s Indians in Kenya. Aiyar certainly provides a strong guide to approaching transnational history while maintaining a keen eye on the local.