Reflecting on Africa’s urban past in the context of African history and as part of a global phenomenon is a challenging mission situated at the intersection of three subfields of research: African history, urban history, and global history. The complexity of this task is further intensified since each of these subfields is framed by its own “psyche” of historiographic mentality, which is sometimes surprisingly positional. An eighteenth-century missionary report from the capital city of M’banza-Kongo could be considered as symptomatic:  In this report, the missionary complained about being able to cross the entire capital city without seeing a single house in the surrounding greenery of the equatorial. [[i]] In other words, urbanity in Africa is disavowed while Africa’s bucolic image is strengthened. The depiction of towns in sub-Saharan Africa as “villages” is persistent throughout the ages from Rousseau’s “noble savage” to nineteenth- and twentieth-century European colonial accounts. This perspective has been carried directly into some recent urban-studies textbooks. Thus, Peter Hall writes in the introduction of his book Cities of Tomorrow:

“This is supposed to be a global history, yet – given the all-too-evident confines of space and of the author’s competence – it must fail in the endeavor. The resulting account is glaringly Anglo-Americocentric. That can be justified, or at least excused: as will soon be seen, so many of the key ideas of twentieth-century western planning were conceived and nurtured in a remarkably small and cosy club based in London and New York. But this emphasis means that the book deals all too shortly with other important planning traditions, in Spain and Latin America, in the Russian Empire and the Soviet Union, in China. Those must provide matter for other books by other hands.” (p. 6) 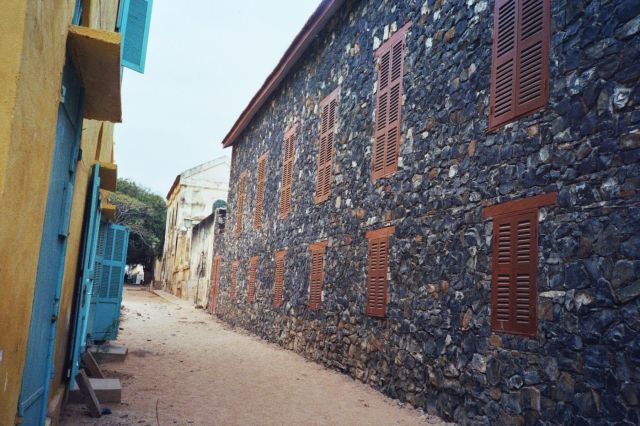 Pre-colonial house on Gorée Island, Senegal. While this permanent architecture and imported materials are identified with the upper métis classes, the labor force was African. As a product of the transatlantic slave trade among other exchanges, it stands as a vociferous visual evidence of African slaves who are muted in the archival records. Photo by Liora Bigon.

Sub-Saharan Africa is not even mentioned in passing. It is rather perceived as the antipode of occidental urbanity, caught and imagined within a web of difference and absolute otherness. In many ways, the question of “why nobody studies sub-Saharan African landscapes?”, asked by the American anthropologist Grey Gundaker of her colleagues in garden and landscape studies, could also be asked in the urban context. Referring to the answer that Africans do not have flower gardens, Gundaker wondered: “Considering the happiness and goodwill that gardens are said to inspire, it seems rather heartless to blame garden lovers for the idea that Africans lack landscapes.” (p. 41) More than a deliberate exclusion of African history from urban history, this “lack” could be explained by a combination of a lack of interest and a lack of knowledge.

Though some occidental urban models, such as the industrial capitalist city (or in the case mentioned above flower gardens) are prominent, they are not the only ones. Yet mainstream urban historians sometimes forget this, which produces a doubled-edged problem: On the one hand, from the vantage point of the present, if the industrial capitalist urban model is considered, consciously or unconsciously, as the default or the normative model, the ‘other’ urbanisms seem antithetically pathological (chaotic, primitive, dysfunctional). On the other hand, historians that were educated in the West often felt rather confused and disoriented when studying the African urban past, as they had to discover that some of the established categories of historical analysis cannot be fruitfully used. For instance, if the emergence of urban society in medieval Europe is considered to be the result of farming with a plough – leading to rising population densities, more pronounced socio-economic hierarchies, literacy and finally, urbanization – cities cannot develop in cultures that rely on the hoe. But as Steven Feierman points out, these kinds of historical check-lists (plough>cities) have no explanatory significance per se, but are essentially cultural specific. The antithesis of such a check list (hoe>villages) has never existed in reality: regions in Africa had productive agricultures without the plough, high population densities without hierarchical states, and cities without literacy.

However, the growing academic awareness of this problem, especially since the 1960s, has brought a gradual change, which could be characterized by at least two historiographic “complexes.” The first complex was led by committed Africanist historians who devoted their careers to showing that sub-Saharan Africa not only had an urban history, but also that this history was marked by “extraordinary complexity and dynamism.” Basil Davidson (1914-2010), for instance, mentions that he was first entranced with Africa when he happened to visit the Sahelian city of Kano with its impressive mud walls in 1941 during his army service in the Second World War. Sensing that “Black Africa” does have an urban history after all, he “found out later, Kano was 700 years old, if not a lot more. But even five hundred years meant history, and there wasn’t any history in Africa, as far as I’d ever been taught.” [[ii]] Davidson’s statement was a response to the frequently-quoted 1963 claim of Hugh Trevor-Roper, a professor at Oxford University, who excluded the city of Kano, inter alia, from history: “perhaps in the future there will be some African history to teach. But at present there is none: there is only the history of Europeans in Africa.” 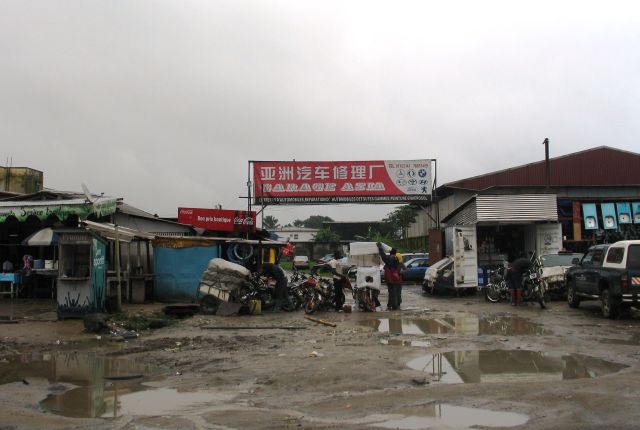 Chinese-owned garage on the way to Douala, Cameroon. An implied testimony of the recent and extensive international and transnational flows between China and Africa. More than the return of colonialism, such newly created spatialities signify the ongoing globalization process. Photo by Liora Bigon.

The second historiographic complex, apparent in more recent “global” urban history works and textbooks, is a scholarly desire to balance Eurocentric material by incorporating something “African.” However, the incorporated examples tend to be the most obvious and celebrated ones, being picked almost randomly from renowned textbooks on African history, resulting in a déjà-vu affect. A limited corpus of often-repeated examples became common in this literature: the Yoruba city, Swahili cities, and Great Zimbabwe (appearing together or separately). [[iii]] Picked almost randomly, the inclusion of only a few select examples might create a distorted picture as well. In his celebrated text on global urban history The City Shaped, Spiro Kostof studies, for instance, in detail the classical grid plan of cities throughout history. Beyond the canonical repertoire of European cities during the Middle Ages and the Renaissance and grid designs in the New World, he mentions Asia and the Near East only briefly. No indigenous examples, however, are given for Africa beyond the ancient Egyptian pyramid town of Kahun (p. 103). There is one paragraph on the Roman grid of Timgad in North Africa (p. 107) and two other African cities, which are colonial creations, are listed anecdotally without any further discussion. The first of these examples is from northern Africa, namely “French Morocco” (p. 102), and the second is South Africa’s Pietermaritzburg (p. 149). As “White” Pietermaritzburg is the only example from sub-Saharan Africa, the result is somewhat strange.

In fact, there are historical examples of indigenous urban grids in sub-Saharan Africa, such as the Mouride city of Touba in Senegal. But here the geographer Eric Ross shared a similar Eurocentric experience: While presenting his findings at a lecture in Montreal, one of his colleagues remarked that the influence of French “Haussmannian” planning is obvious in Touba against all compelling evidence that its design clearly was vernacular to the region. The urban heritage of erstwhile colonized countries in the Global South more generally suffers from a similarly degrading approach, even though material evidence clearly points to indigenous originality.

With Catherine Coquery-Vidrovitch’s pioneering publication The History of African Cities South of the Sahara it seems that this problematic situation is now changing for the better. This change includes unprecedented African urban history monographs and comparative studies in English, French, and other European languages, as well as a series of monographs by African scholars. Two recently-edited volumes that explicitly tie African history to (global) urban history are not only about presenting new case-studies and incorporating them into the larger narrative. These volumes – Garden Cities and Colonial Planning: Transnationality and Urban Ideas in Africa and Palestine and Place Names in Africa: Colonial Urban Legacies, Entangled Histories – challenge the fragmented scope of “globality” as treated so far in the traditional literature by bringing into the fore some previously neglected aspects. As part of an intensified wave of studies that fill in the conspicuous “lack” (that is, the exclusion of African urban history from global history), it is now being acknowledged that historians should integrate the variation of urbanities that can be found in African history into world history.

[[i]] Quoted in: Georges Balandier, Daily Life in the Kingdom of the Kongo from the Sixteenth to the Eighteenth Century (New York: Pantheon Books, 1968), p. 132.

Liora Bigon (PhD in Architecture, Manchester University) is a Research Fellow at the Institute of Western Cultures, the Hebrew University of Jerusalem. Her research and teaching concern the urban, architectural, and planning histories of the various indigenous and European cultures in sub-Saharan Africa.

Like Loading...
This entry was posted in Article and tagged Africa, Architecture, Empire, Theory. Bookmark the permalink.