The Bloodlands’ City: A New Book on the Making of Ukrainian Lviv

In the course of the twentieth century the city of Lviv in present-day Ukraine went through virtually all of East Central Europe’s formative experiences: war, post-imperial collapse, competing national projects, Soviet and Nazi occupation, the murder of Eastern

European Jewry, population exchange and Sovietization. In 1914 Lviv (Polish: Lwów) was a predominantly Polish and Jewish city with a growing and increasingly confident Ukrainian minority and the provincial capital of the Habsburg crownland known as the Kingdom of Galicia and Lodomeria. In 2014 Lviv had been an overwhelmingly Ukrainian city for decades and many of its inhabitants were among those demonstrating for a European orientation of their country on Kyiv’s square of independence. Lviv is often construed as the hotbed of an exclusive Ukrainian ethnic nationalism alien to Ukrainians in the East and ultimately incompatible with their own Soviet past. Not least against this background Tarik Cyril Amar’s study is an important reminder of how much more complex Lviv’s past really is. Lviv’s transformation during the first half of the twentieth century is also the subject of Christoph Mick’s book Lemberg, Lwów, L’viv, 1914-1947: Violence and Ethnicity in a Contested City published in English in 2015. Furthermore, the city is located in what Timothy Snyder has called the Bloodlands, i.e. those places in Europe which were victim of both Stalinist and Nazi aggression from the 1930s until Stalin’s death in 1953. Amar is interested in similar questions, but focuses on the period since the first Soviet invasion in 1939 and on the impacts of Sovietization after the Second World War. Thereby his study offers two important perspectives: Firstly, by looking at the alternation of Soviet and Nazi occupation regimes in one particular city, Amar is able to discuss the question of their interaction more precisely than Snyder’s grand narrative leaves room for. Secondly, by expanding the focus to the 1950s and 1960s the end of Amar’s story does not coincide with the end of mass violence, but also takes the impact of postwar policies into account. His analysis is based on a rich array of sources and secondary literature and considers a wide range of issues such as interethnic relations, social transformation and the remaking of urban living space.

Lviv’s first encounter with Soviet rule took place between 1939 and 1941 after Eastern Poland was annexed by the Soviet Union in accordance with the terms of the so-called German-Soviet Non-Aggression Pact. The advent of Soviet forces put severe strains on local interethnic relations with a number of Poles and Ukrainians accusing Jews of welcoming the invaders. While Ukrainians, Jews, and Poles were all severely affected by Soviet oppressive policies such as deportations and attacks on their religious institutions, Poles were hit particularly hard due to the Soviet Union’s determination to turn a predominantly Polish city into a Ukrainian one. Ukrainians and to a lesser degree Jews were also offered new opportunities, for example in higher education. In June 1941 the Nazi invasion of the Soviet Union put an abrupt end to Lviv’s first encounter with Soviet ambitions in the West.

The Red Army Marches Through Lwów/Lviv, 1939

While the Soviet regime had been brutal, it had not attempted to physically annihilate any of the three ethnic groups living in Lviv. In contrast, in the course of the Nazi occupation, the city’s Jewish population was murdered almost in its entirety. Amar stresses that the Nazis brought “forms and extremes of violence” (p. 88) to Lviv that were unprecedented, but that with regard to the perceptions and reactions of the local population, Soviet and Nazi policies nonetheless influenced each other. One example is the pogrom immediately after the Germans’ arrival in the course of which four to eight thousand Jews were murdered mostly by Ukrainian nationalists and other segments of the Ukrainian local population. The perpetrators’ anti-Semitism and its place in Ukrainian nationalism were important factors, the association of Jews and Soviet rule – a trope eagerly taken up by German propaganda – was another. Amar points out that the subsequent ghettoization and murder of the Jews by the Germans was “urban and public” (p. 114), since the non-Jewish population was well aware of the treatment of Jews and their expulsion from the city was accompanied by plunder and the fight for formerly Jewish property. Nazi policies toward Polish and Ukrainians were not aimed at total extinction, but were nonetheless repressive and violent. When it came to “lower-level collaboration” (p. 120), German authorities preferred Ukrainians to Poles and sought to exploit the antagonism between the two groups. However, the Nazi regime rejected the idea of an independent Ukrainian state under German auspices, which leaders of the Organization of Ukrainian Nationalists (OUN) had hoped for.

The second radical change of Lviv’s ethnic makeup occurred after the Red Army recaptured the city in July 1944 and turned it into a central site of the population exchange between Poland and the Soviet Union. The expulsion of Poles went hand in hand with a change of the urban elites. However, particularly the higher positions were generally not filled with local Ukrainians, but rather with “easterners” from Soviet Ukraine who came to Lviv as agents of Sovietization and who turned Lviv into a place of inner-Ukrainian encounters. From Moscow’s perspective the city served as an ideal site and symbol to implement their vision of Soviet modernity in the West, but at the same time Soviet elites were extremely suspicious of Western Ukraine and its urban center as a nucleus of anti-Soviet Ukrainian nationalism. Thus the post-war industrialization drive in Lviv and the collectivization of the countryside were not just framed as grand modernizing projects, but were also inextricably linked to the Soviets’ fight against Ukrainian nationalism. In this reasoning, turning nationalistic Ukrainian peasants into a Soviet proletariat would destroy nationalism’s basis. Indeed, in the postwar years an increasing number of the workers in Lviv were recruited from among the local Ukrainian agrarian population. 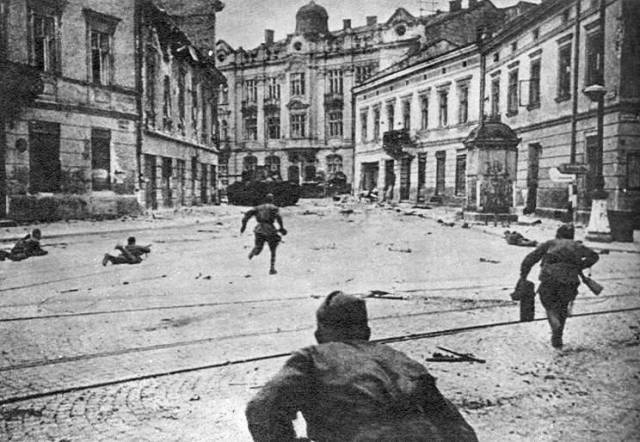 The Soviets were determined to enforce their ideology not just with regards to the present, but also to the past. The small pre-Soviet Ukrainian intelligentsia was a reminder of this past and the measures taken against individual prominent academics ranged from repression to accommodation. While some were deported from Lviv and put on show trials, others were able to continue their careers often after having accepted the axioms of Soviet ideology. A different reminder of Lviv’s pre-war past, the last synagogue, was closed by the Soviet authorities in 1962 in the context of a countrywide attack on religious life, which in case of the Jews “coincided with official support for anti-Semitic stereotypes” (p. 272). In his final chapter Amar reconstructs the Soviet remaking of Lviv’s history by analyzing the narratives it produced about the interwar Communist Party of Western Ukraine and the Communist underground in German-occupied Lviv which in spite of their factual marginality were nonetheless integrated into Lviv’s official memory.

The principal claim of Amar’s book is the significance of Soviet policies for the transformation of Lviv. He repudiates narratives which attribute the city’s distinct position in Ukraine solely to its experience of comparatively liberal Habsburg rule, the strength of pre-Soviet nationalism and the absence of “transformatory Soviet violence” (p. 321) which Eastern Ukraine experienced during the 1930s. Of these three claims Amar only thoroughly rejects the third one in light of the experience of violence in Lviv in the 1940s during the Soviets’ fight against Ukrainian national resistance. While Amar is right to point out that Soviet violence also played a role in Lviv, the fact remains that Ukrainians in Eastern Galicia were spared the experience of the Holodomor, the Soviet-made famine in which millions of peasants perished in Central and Eastern Ukraine at the beginning of the 1930s.  But Amar’s essential argument is convincing: while pre-Soviet traditions (and their re-appropriation after 1991) are one factor explaining Lviv’s present political and cultural orientation, the Second World War, Soviet policies such as Ukrainization, industrialization and the creation of an urban working class were equally transformative experiences. Furthermore, in view of the impressive depth of Amar’s study, one is more than happy to overlook the book’s somewhat lurid subtitle.

Franziska Davies is assistant professor (wissenschaftliche Mitarbeiterin) at the Department of Eastern European History at the Ludwig-Maximilians-Universität München. She is working on a book that reconstructs the experience of Muslims in the Russian army from 1874 to 1917.