Vicissitudes of Globality: The Many Connections of Eighteenth-century Charleston

What is the promise of global urban history for the pre-nineteenth-century era? As the vast majority of discussion about cities and “the global” continue to focus on the decades after 1850, I want to return to an earlier time.  Concentrating our attention on Charleston, South Carolina, a city that was the product of early modern Atlantic crossings and circulations, reveals the expansive contexts in which this imperially-driven growth happened.  Charleston’s setting has mostly been labeled as the “Atlantic World,” which was created when European and Africans moved around the Atlantic Ocean and the former claimed territories in the Americas.   While we now have a pretty good grasp of these connections and it is fairly easy for me to describe them, the question of Charleston’s role in a global urban process is much less clear. And, what holds for Charleston, also holds for the other major cities of Britain’s early modern Atlantic world, such as Philadelphia, New York, Boston, and Kingston, Jamaica.  What is more, even the specific role of cities in creating an Atlantic system is often taken for granted by historians, meaning that the urban is not often analyzed very precisely as a historical force, even in an early modern world that often subjugated individual agency to the body corporate.  So, bringing the global AND the urban into focus in a history of Charleston, what new things can we learn about global urban issues before 1800?

“An Exact Prospect of Charlestown, the Metropolis of the Province of South Carolina” Bishop Roberts, 1762, from the Gentleman’s Magazine

“Why focus on Charleston?” one may ask.  Few Europeans really know much about the city, aside from the fact that it originated a famous 1920s dance and is the backdrop for Porgy and Bess.  Many Americans see it as a tourist and fine dining destination. In reality, the recent episodes of racially-motivated violence are actually the best clue to the historic importance of this city, which was one of the twenty largest in the early modern English-speaking world.  For Charleston has always been a city in which blacks and whites have lived, often uncomfortably, side-by-side.  In the eighteenth century, it was the place where a very large proportion of Africans disembarked in mainland North America following a grueling transatlantic voyage, only to be sold on its wharves into an equally appalling life of enslavement.  With half of its 16,000-strong population in 1790 being of African origin, and its close commercial ties to Caribbean cities like Kingston, Jamaica, and Bridgetown, Barbados, (that were home to even greater numbers of Africans) Charleston was a cosmopolitan hub in a black urban Atlantic.  As an urban space, it therefore facilitated multiple Atlantic connections between blacks moving involuntarily around the Atlantic littoral and between the products of black labor and, in the form of rice, agricultural know-how developed in Africa.

Engraving of a nineteenth-century slave auction in South Carolina, with the state capitol in the background

For its white inhabitants the city was the place where an Atlantic Enlightenment culture of gentility and politeness was forged with its fine buildings, well-planned streets, dancing assemblies, Library Society, transatlantic scientific networks, and evangelical religious networks.  For both Africans and Europeans – albeit in startlingly different ways – the cityscape thus facilitated commercial and cultural connections that moved beyond their home continents to circulate around the entire Atlantic basin. More than connections, though, the city was a vehicle for the spread of British control and authority, and for the enforcement of an economic system that brought wealth not only to white urbanites but also to the imperial center in London. 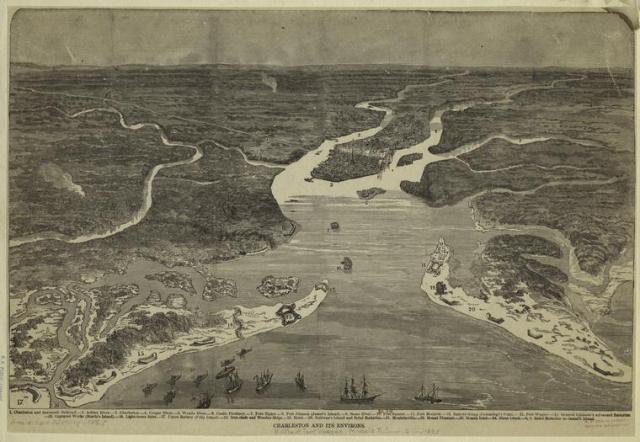 Charleston and its Environs, 1866

Less well known than its Atlantic foundations are Charleston’s ties beyond this oceanic basin.  East Coast British American cities had fewer direct connections to the Pacific and to Asia than their Spanish American counterparts, where the Manila Galleon trade – increasingly controlled by local merchants – acted as a conduit for Chinese and Japanese goods.  However, as the very recent work of Mark Hanna and Jonathan Eacott shows, there were still many ways in which Britain’s burgeoning commercial interests in East and South Asia were foundational to Charleston.[1]  Thoroughly refuting the received wisdom that America was Britain’s “first” empire and India its second (and more successful) foray into imperialism, Hanna and Eacott reveal an array of interdependencies between Britain’s Asian and American possessions.  While some of these connections were officially fostered by the imperial center, many more were illicit and informal.  In Charleston’s pre-1720 early years, gold and silver looted by Red Sea pirates was the hard currency that fuelled urban and colonial growth in the region.  As a result, these mariners on the margins were welcomed in the town, even though their modus operandi was abhorrent to metropolitan rulers.  Eventually, the city outlawed the pirates as a way of winning London’s protection from the Spanish threat in St Augustine to the south.  As the colony of South Carolina increased in wealth and security, however, Asian influences again bolstered Charleston’s importance.  With the city turned into a playground for wealthy white plantation owners, demand for exotic commodities such as tea, coffee, calico fabric, and spices, increased exponentially.  Charleston’s reputation as a center of gentility and politeness thus came to rest partly on the availability of such exotic goods, some of which were not on offer to Britons themselves because they competed with domestic manufactures.

Much like the incorporation of Japanese motifs into the material culture of Mexico City’s elites, highlighted in a recent blog post by Nino Vallen, Asian goods had also made their way into the consumption habits of British Americans.  Unlike Mexico City, however, Charleston was not a world city – or perhaps a global city.  Rather, in early modern Charleston, we can see “the world in a city.” With its large black population of mixed West African cultures, languages and religions, its Chinese lacquered tea caddies filled with China Bohea, its fine mahogany Chippendale-style furniture,  and its market place offering corn, sweet potatoes, beef, sugar loaves, lemons, and rice, Charleston was the sum of its global parts.  Yet, it was not a city that was a command and control center of early modern globalization.  Planters held accounts with London and Bristol merchants and whites consumed tea because those merchants saturated town stores and warehouses with it.  The town’s traders lived and died according to their reputation in London.  Without the regard and the custom of Britain’s largest cities, and without the slave trade that was ultimately funded from those imperial hubs, Charleston could not function.

Contemplating Charleston’s connections, and comparing them to those of its contemporaries, we can see that even in the early modern period, the global and the urban could relate to one another in more than one way.  Some places that we now recognize as being global cities already had that commanding presence in the eighteenth century.  Places that we don’t recognize at all, and have long since faded from the global stage, were also global.  The difference lies in the question of whether we can identify the world in a city, or whether that city was a command center of creating world connections.  On no account, though, should this distinction consign cities like Charleston to a “lesser” status in the global urban process.  Indeed, the nature of early modern globalization would have been completely different – and probably severely compromised – had it not been for the role of these cities that concentrated global influences, only to disperse them across surrounding regions that then fell into the embrace of transnational networks of commerce and culture.

Emma Hart is a senior lecturer at the University of St Andrews, Scotland.  Her research focuses on Britain’s Atlantic world between 1500 and 1800.  Currently, she is involved in projects on early modern cities and globalization, and the role of market spaces in the emergence of an American economic culture before 1800.

1 Response to Vicissitudes of Globality: The Many Connections of Eighteenth-century Charleston