The “Spiritual Capital” of the Rust Belt: Pittsburgh and the Postindustrial Transformation of North Atlantic Cities

In 1973, Daniel Bell’s The Coming of Post-Industrial Society hit bookshelves just as the golden age of postwar capitalism wound to an end. In it, Bell described post-industrial society as one in which the basis of the economy had shifted from the production of goods to the provision of services. He argued that knowledge industries had replaced manual labor as the most important social force in advanced capitalist nations, and that a technical-professional class had supplanted the working class. For Bell, this marked progress toward a more just future characterized by shorter workdays, more leisure time, and a more equitable distribution of resources. Journalists, pundits, and politicians eagerly embraced Bell’s thesis, and “post-industrial society” rapidly became part of the popular and professional lexicon.

When Bell predicted that manufacturing would decline and that professional services and technology industries would become increasingly important to industrialized economies, he was not telling planners and politicians in Detroit, Manchester, and the Ruhr Valley anything they did not already know. In those places, economic trends away from manufacturing and toward increased service sector employment had been clear for a decade or more.

In the United States, Canada, the UK, Germany, Austria, Italy, France, Belgium, and Spain, manufacturing employment declined between 1970 and 2000, while service-sector employment increased. The United States, the UK, and Belgium shed around half their manufacturing jobs; Germany lost 40 percent; Canada and France more than a third; and Italy 20 percent. Employment in services and the public sector increased by 10 to 20 percent over the same period.[1]

By the early 1980s, the crisis of manufacturing was discursively situated in the North American Rust Belt—an economically devastated region ranging west from New York into Southern Ontario and across the American Midwest. But Western Europe’s steel and coal country corroded as well, and the changing geography of production made the industrial crises of the 1970s and 1980s a decidedly North Atlantic, rather than strictly national or truly global, phenomenon. Cities in coal and steel belts had been seats of industrial power in the early twentieth century. By the 1970s, the economic and political might of the North American heartland, Germany’s Ruhr Valley, and the English Black Country had been significantly diminished by newly industrializing regions in the global South, from the U.S. Sunbelt and Mexico to South America, Asia, and the Middle East.

The decline of manufacturing and rise of services that Bell predicted would yield a socially just post-industrial society instead turned out to be harbingers of the rising inequality critics associated with neoliberalism. In manufacturing centers, as public resources dwindled, local officials made harsh calculations about whose needs they would no longer meet, rather than seeking to better meet the needs of all residents. And indeed, public officials employed the kinds of capital subsidies, supply-side interventions, central-city makeovers, and urban branding strategies that sociologists and geographers have described as central to neoliberal urbanism. Yet, as I argue in my forthcoming book, there was nothing essentially neoliberal, or even particularly new, about such policies—most had long histories as urban development tactics. Instead, they were deployed in new ways, with different intentions, and in changing institutional settings, at a time when liberals and conservatives increasingly came to share the same sense of political possibilities. One result was that coalitions of political and economic elites remade cities in ways that privileged the interest of corporations and the white-collar workers and tourists they hoped to attract, rather than the residents they already had. In the 1970s and 1980s, Manchester built urban malls and Glasgow subsidized the private redevelopment of industrial buildings in a historic wholesale district for middle-class housing targeted to young professionals. After shipbuilding declined in Belfast, city officials worked with private developers to turn shipyards on the River Lagan into an entertainment district with hotels, restaurants, and nightclubs. The Basque government pinned its hopes on a cultural strategy and in 1981 invited the Guggenheim to build a new museum in Bilbao’s aging port district. 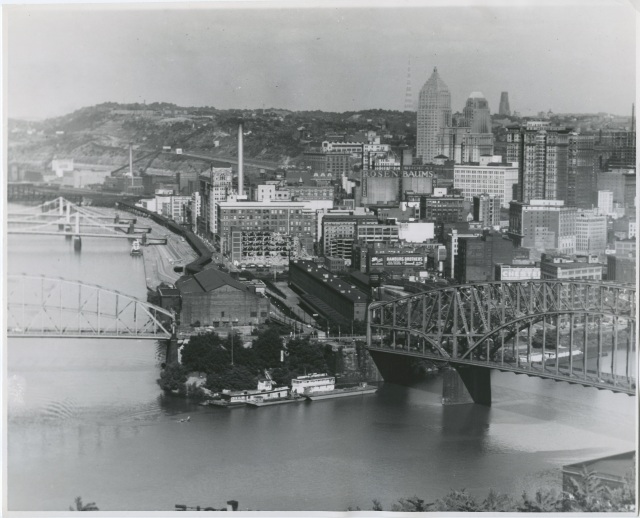 Downtown Pittsburgh before the Renaissance, ca. 1950

It was Pittsburgh, however, that became the “spiritual capital” of the Rust Belt.[2]To public officials and civic-minded businessmen in aging manufacturing centers around the world, postindustrial Pittsburgh represented a phoenix that rose from the ashes of the steel industry with a revived downtown; a lively cultural district; expansive university, medical, and technological complexes; and vibrant residential neighborhoods. International interest in Pittsburgh’s urban regeneration strategies dated back to the city’s “Renaissance,” an urban renewal program that rebuilt the downtown core after World War II. Through the Allegheny Conference on Community Development, formed in 1944, local business elites forged an archetypal public-private partnership with local officials and directed Pittsburgh’s urban development for the next fifty years. Coordinated by the Allegheny Conference and Mayor David Lawrence, the Pittsburgh Renaissance reflected the shared concerns of political and corporate elites that Pittsburgh’s reputation as a smoke-filled industrial center would slow its postwar growth and deter new investment in both city and region. Most visibly and most importantly, projects undertaken jointly by political and corporate elites improved the city’s environmental conditions through smoke, pollution, and flood controls. The private sector partners added office space to the downtown business district through skyscraper construction, while city officials undertook massive slum clearance projects in African American and working-class white neighborhoods, and used public funds to subsidize the expansion of a steel mill within the city limits. In the 1950s and 1960s, more than seventy national and international delegations of urban policy tourists who hoped to replicate the Renaissance arrived in Pittsburgh to see first-hand how Democratic mayors and Republican businessmen had worked together to scrub clean the streets and skies of the dirty, polluted, and flood-prone city. Visitors from Dayton and Detroit wanted to know more about Pittsburgh’s urban renewal program and the public-private partnership behind it; so did officials from Canada, Australia, Brazil, Belgium, Germany, and Scotland. 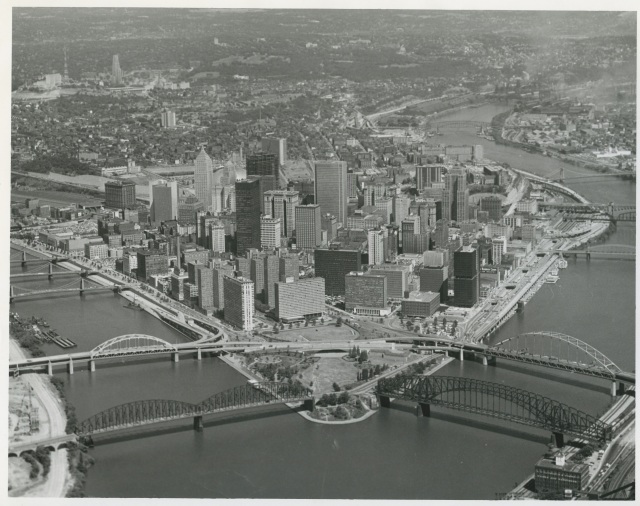 Downtown Pittsburgh after the Renaissance, ca. 1969

If Pittsburgh’s postwar urban renewal program made it a popular model for other aging industrial cities in the 1950s and 1960s, its postindustrial transformation in the 1970s and 1980s provided a blueprint for political and business elites who sought to revive declining manufacturing centers. When Richard Caliguiri became mayor in 1977, he set out to resuscitate the city at the heart of the collapsing American steel industry by remaking it for new kinds of residents. He dubbed his agenda for downtown redevelopment and neighborhood stabilization “Renaissance II.” He and his planning department routinely downplayed the devastating effects of industrial restructuring on the region’s blue-collar workers and focused instead on cultural development, high technology, and service sector job creation for the residents they hoped to attract to the city. Caliguiri revived the city’s public-private partnership and introduced a wide array of public incentives for private development intended to encourage corporate leaders to build new headquarters buildings downtown and otherwise invest in Pittsburgh. During his tenure as mayor, nearly $2 billion in public and private funds reshaped Pittsburgh. Renaissance II opened up new, decentralized concentrations of economic activity, new areas for residential development, and new uses for sites once devoted to heavy manufacturing. Neighborhood commercial districts that had once served working-class residents were transformed into shopping and entertainment zones designed for and marketed to tourists and suburbanites. By the turn of the twenty-first century, most of the region’s steel mills had been razed and two were replaced with malls, the literal transformation of sites of production into sites on consumption. 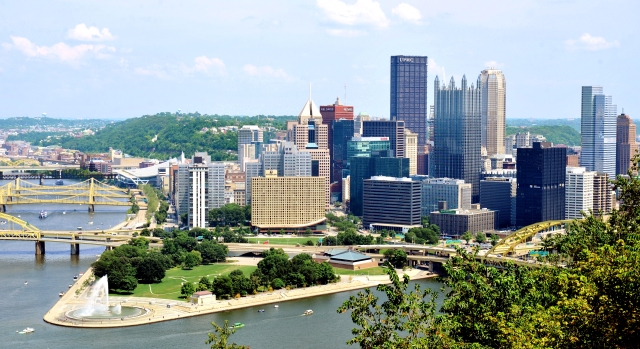 Popular narratives of the decline of basic industry in North America and Western Europe make the postindustrial transformation old manufacturing centers seem like a historical inevitability, the outcome of neutral market forces. The story of Pittsburgh and cities like it demonstrates, instead, that political and civic elites made decisions over the course of several decades about how to allocate resources in a way that exacerbated inequality and sacrificed the well-being of large portions of urban populations in order to “save” cities. In doing so, local officials abandoned social democratic goals in favor of corporate welfare programs, fostering an increasing economic inequality among their residents.

Tracy Neumann is an Assistant Professor of History at Wayne State University and a postdoctoral fellow at Harvard University’s Weatherhead Center for International Affairs. She is the author of the forthcoming book, Remaking the Rust Belt: The Postindustrial Transformation of North America (University of Pennsylvania Press, 2016).  She specializes in transnational and global approaches to twentieth-century US history, with a focus on postwar cities, neoliberal urbanism, and international development.

1 Response to The “Spiritual Capital” of the Rust Belt: Pittsburgh and the Postindustrial Transformation of North Atlantic Cities