Mexico City was one of the most important and culturally vibrant hubs of political exile in the Western Hemisphere during the twentieth century. However, the scholarly literature about this phenomenon has so far been limited by disciplinary specialization and a mostly Eurocentric tendency to focus on national communities of exile, particularly Spanish Republicans. Based at the University of Cologne and funded by the European Research Council, the postdoctoral project Left-Wing Exile in Mexico, 1934-1960 aims to produce research that moves beyond such limitations. Lead investigator Aribert Reiman is researching the urban topography of exile in Mexico City in a way that cuts across national communities of exile, while my fellow postdoctoral researcher Elena Díaz Silva is taking a multidisciplinary approach to the study of gender identities and particularly masculinities in exile.

My project traces the trajectory of Cuban furniture designer Clara Porset y Dumás who arrived in Mexico City as a political exile in 1935. Addressing the methodological imperative of global history to avoid losing sight of local processes, I am using Porset’s work as a furniture and interior designer to show how the transnational socialist and functionalist ideals that infused her work were transformed in the specific context of post-revolutionary Mexico City. Porset’s development as a designer and the consumption of her furniture further provides urban historians with a unique view from the interiors of Mexico City’s homes and offices of social and cultural change during her most active years from the 1940s to the end of the 1950s. In particular, this study aims to provide a new perspective on Mexico’s move from the relatively left-wing Lázaro Cárdenas administration (1934-1940) to the rapid industrialization and rightward political shift of the 1940s and 1950s as it was expressed in urban material culture.

Born in 1895 into a relatively privileged family in Matanzas, Cuba, Porset was educated in art and design from 1925 to 1930 in New York at Columbia University’s School of Fine Arts and the New York School of Interior Decoration. From 1927 to 1930, she also studied in Paris at the École des Beaux-Arts, Sorbonne and in the atelier of architect Herni Rapin. However, Porset’s relatively quick and successful integration into artistic and political milieu of mid-1930s Mexico City was largely due to the suitability for this environment of her socialist and anti-imperialist politics.

Porset had first became actively involved in socialist politics after fleeing a wave of bloody repression of opponents by Cuba’s Gerardo Machado regime. Arriving in New York City in November 1932, she became involved in transnational and particularly Circum-Caribbean political networks with people from different national and ideological backgrounds united by overarching ideas such as anti-imperialism, anti-fascism, and Communism. 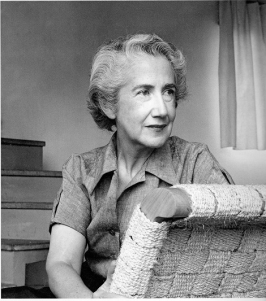 Forced to flee Cuba again in mid-1935, Porset settled permanently in Mexico City. Mauricio Tenorio Trillo describes this period as “the cosmopolitan Mexican summer” when international radicals, writers and artists gathered primarily in Mexico City and often co-operated to craft a new vision of Mexican culture. Porset’s social networks bear witness to the almost continuous flows of left-wing exiles and artists through the city from the 1930s through the 1950s, ranging from fellow Cubans to exiles from Nazi Germany during the 1940s and those fleeing the McCarthy-era persecution of suspected communists in the United States during the 1940s and 1950s.

In 1938, Porset married founding member of the Mexican muralist movement and Mexican Communist Party member Xavier Guerrero. This drew her deeper into what Rick López describes as a post-revolutionary ‘aesthetic reorientation’ of Mexican identity rooted in indigenous and folk traditions. One cultural form singled out for revision during this period was architecture. From the 1930s to the 1950s, a new generation of politically committed Mexican architects sought to develop a distinctly Mexican revolutionary nationalist modernism. They did this primarily by combining international trends in modern architecture with the use of local materials and construction techniques as well as the “plastic integration” of murals and sculptures inspired particularly by rural and pre-Hispanic motifs.

Clara Porset sought to encourage a similar process within the interiors of Mexican homes, offices, and leisure venues. In the pages of prestigious Mexican magazines such as Espacios and Arquitectura and in the 1952 Mexico City exhibition “Art in Daily Life,” Porset argued that the development of a uniquely Mexican form of industrial design needed to be considered as integral to the state’s plan to accelerate Mexico’s industrial development during the 1940s and 1950s. This was necessary, in Porset’s view, to preserve Mexico’s cultural and economic autonomy and raise popular living standards. 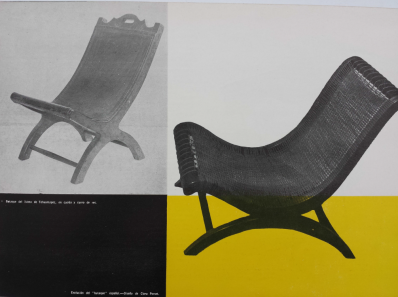 Image of a traditional butaque from the Tehauntepec Isthmus (above, left) and a more recent version by Clara Porset in Espacios, 1953.

Porset’s furniture designs captured a revolutionary nationalist desire to both address Mexico’s historical contradictions through racial and cultural mixing, or mestizaje, and present the Mexican Revolution as the country’s gateway to modernity. Her signature item of furniture was the butaque chair, which she described as perhaps the ultimate mestizo piece of furniture, arriving from Spain and being absorbed and adapted to life in Mexico by local artisans to become a genuinely nationalist and popular cultural expression. Another signature Porset design was a chair called the “escultórico” or “sillón totonaca” based on statues from the Remojada or Totonac culture of the contemporary state of Veracruz and on which Porset collaborated with her husband Xavier Guerrero. Porset also used primarily natural and local materials such as palm and tulle weavings and Mexican pine in her furniture to promote what she described as an extra psychological affinity between the inhabitants of Mexican homes and their furniture.

Porset’s surviving scrapbooks at the Center for Industrial Design Research (CIDI) in Mexico City hint at another influence on her designs, featuring articles from a Soviet embassy publication detailing the post-World War II Soviet approach to art and architecture. Her argument that national artisanal design traditions needed to be adapted to industrial forms of mass production indeed echoed those of social realist designers in contexts such as the German Democratic Republic. Porset also similarly criticised universalist notions of good design as a dangerous “formalism” that would signify Mexico’s cultural and economic subjugation, most obviously to US imperialism.

In spite of her socialist politics, in practice Porset’s furniture came to represent a kind of Mexican revolutionary modernist chic that mostly ended up in the homes and offices of a select few members of Mexico’s post-revolutionary cultural and economic elite in fashionable neighbourhoods such as the Jardines del Pedregal. Carved into the lava fields to the south of Mexico City beginning in the late 1940s and far away from the increasingly poor center of the city, the Jardines del Pedregal was lauded by domestic and foreign architectural critics such as California-based Esther McCoy – also an admirer of Porset’s work – as the most impressive showpiece of modern Mexican domestic architecture during the 1950s. Over subsequent decades, however, critics of post-revolutionary culture and society such as anthropologist Guillermo Bonfil Batalla increasingly highlighted the development as symbolic of a growing elite aloofness and retreat from the concerns of everyday Mexicans by a new post-revolutionary “beautiful people.” 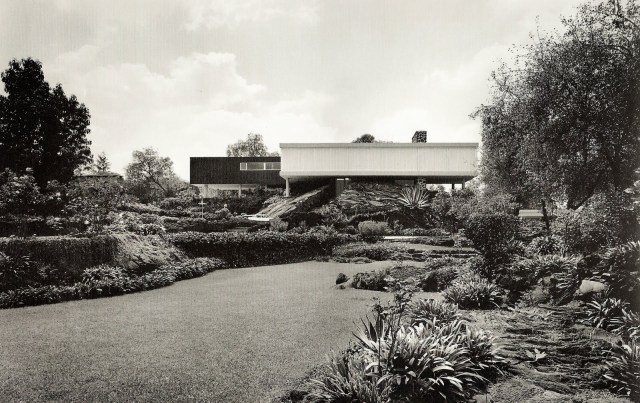 Porset collaborated with prominent architects to design the interiors of several homes in the Pedregal and her work provides a unique insight from their interiors into how the Mexican revolutionary nationalist cultural expressions were woven into the increasing stratification of Mexican Society. The most direct expressions of Porset’s own frustrations with primarily working for what she described in one letter “the odd snob” are contained in private correspondence to friends such as Cuban intellectual José Antonio Portuondo in Havana and German author Anna Seghers in East Berlin. Indeed, a major challenge for my research has been tracing Porset’s correspondence, which is scattered in various archives throughout Mexico, the United States, Cuba and Europe. However, this also highlights the global connections that influenced how architects, artists, and designers such as Porset lived, worked and thought as they crafted new visions of a Mexican revolutionary nation that synthesised post-revolutionary visions of Mexico’s authentic culture and global ideas of modernity, which in turn took shape in Mexico City’s urban landscape.

Randal Sheppard is a postdoctoral researcher on the European Research Council project “Left-Wing Exile in Mexico, 1934-1960” at the University of Cologne. He holds a PhD in History from La Trobe University in Melbourne, Australia, and his new book A Persistent Revolution: History, Nationalism, and Politics in Mexico Since 1968 is released by University of New Mexico Press in spring 2016.