The Urban Environmental History of West Ham and the River Lea

By Jim Clifford, University of Saskatchewan

Greater London’s population increased by five million during the nineteenth century and the city developed into a major center of industry, transforming the marshlands of the Thames Estuary into polluted and crowded urban landscapes. The rich collection of nineteenth-century London maps make digital mapping a powerful tool for exploring the environmental history of West Ham, the River Lea, and Greater London. The interactive map of factories digitized from the five feet to the mile Ordinance Survey, displays the historical Geographic Information Systems database at the core of my book West Ham and the River Lea: A Social and Environmental History of London’s Industrialized Marshland, 1839–1914.

Sliding between the early 1870s and the mid-1890s shows how factories migrated to the eastern suburbs as industry expanded in Greater London. West Ham was London’s most populous suburb and it became the center of Greater London’s industrial economy. The River Lea braided into multiple streams in West Ham, providing transportation for the coal barges that helped fuel a wide range of industries. Large factories also developed along the Thames, south of the docks, in a region called Silvertown. One of the nineteenth century’s most compelling examples of the relationship between environmental and social history comes together at the confluence of two rivers, where heavy industry and a population of more than a quarter of a million coexisted in an independent suburb.

Rapid growth, inadequate water infrastructure, industry, and the use of coal to cook and heat homes created major environmental challenges across Greater London. The intensity of the pollution and the resulting health consequences were not equally felt. A district like Hampstead, located upwind and uphill from industry and overcrowded neighborhoods, was considerably healthier than Poplar, Bermondsey, or West Ham. Environmental conditions shaped the social history of nineteenth-century London, as they contributed to increased social homogenization. The vast marshlands of the Thames Estuary and Lower Lea Valley were largely uninhabited at the start of the nineteenth century, as they were associated with ague fever and difficult to drain. Industrial and dock development drew working-class people to new residential districts such as Canning Town on the marshlands. The land was eventually drained by costly, but not completely effective sewers and steam powered pumps. The people who lived on former marshlands in close proximity to the factories that lined the banks of the Lower River Lea or the River Thames did so because they needed to be in close proximity to their work at a factory or the docks. They constantly experienced pollution and unhealthy living conditions that exacerbated their poverty. Heavy rains or storm surges flooded their homes, hot dry summers disrupted the water supply, and turned the Lea into a foul smelling open sewer. Even mundane chores, such as washing the linen, were made difficult because of the high levels of air pollution in the Lower Lea Valley that soiled laundry as it hung to dry. Not surprisingly, people who worked elsewhere or who could afford to commute, lived in better drained districts away from the factories. The health consequences of the poor environmental conditions were very real in the marshland districts and young children died at a much higher rate than in the wealthier, cleaner, and greener suburbs.

The challenging environmental and social conditions in West Ham eventually contributed to a political upheaval in municipal politics. In 1898, a coalition of labor leaders, social democrats, and socialists won control of West Ham’s borough council. Their platform included standard working-class demands, such as unionizing the municipal workforce, but a promise to bring the water supply under public control during a prolonged disruption in the provision of water, galvanized the public behind this emerging political movement. In the decade that followed, even after the Labour Group lost power in 1900, West Ham’s municipal government became more willing to intervene to address poor housing conditions, high levels of infectious disease, unemployment, and the threat of flooding. Tasked with improving the social and environmental conditions of the suburb, the Medical Officer of Health and Borough Engineer gained considerable power. They worked on improving drainage, housing conditions, and even developed a scheme to address unemployment through a largescale public works project to address the ongoing threat of major floods. West Ham’s officials succeeded in reversing the startling rise in infant mortality that peaked in 1900 and the overcrowding started to abate in the first half of the twentieth century, but they never managed to address the strong correlation between environmental degradation and poverty in the region. Careful attention to environmental history sheds new light on the social and political history of East London during the tumultuous decades of rapid population growth, industrialization, and the rise of labor politics. 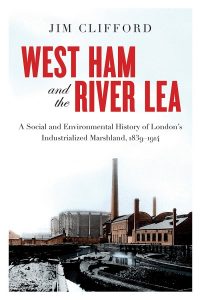 My book focuses on the local social and environmental consequences of rapid industrial and population growth in West Ham, but I am now researching the equally fascinating global history of Greater London’s industrialization. Most of the large factories that lined the Thames and Lea in West Ham relied on global networks to supply large quantiles of commodities such as sugar, tallow and cottonseeds, guano, cinchona, petroleum, copper, linseeds, or gutta percha. Some of these industries contributed to ecological disasters or failures in distant environments. The underwater telegraph cable industry contributed to the near eradication of gutta percha trees on the Malay peninsula and demand for anti-malarial drugs led to failed attempts to establish cinchona plantations in India and Ceylon. The soap industry, with major factories located in West Ham, Greenwich and Brentford, was only able to grow because of global commodities. Soap making had a long history in London, relying on local supplies of animal fat from butchers and waste collectors. But they could not have grown into major industrial sites producing hundreds of tons of soap per week if they were limited to local or even regional supplies of tallow. During the nineteenth century, London’s soap makers and their counterparts on the River Mersey, developed a global supply network to import tallow, whale oil, palm oil, coconut oil, cottonseeds and a range of other vegetable oils. The tallow first came from the Eurasian Steppe via Russia, and later from Argentina, Uruguay, the United States, Australasia, and Western Europe. The soap industry, alongside the candle, edible oils, paint and varnish industries relied on expansive “ghost acres” to remove the ecological limits that nations otherwise faced and facilitate rapid industrial growth. Aside from whaling, the ecological consequences were more benign than the ruthless destruction of gutta percha, but the growth of large scale trade in low value commodities between major urban centers and the rest of the world began a process of transforming the global economy and environment that continues through to today.

Jim Clifford is Associate Professor of Environmental History and Director of the HGIS Lab at University of Saskatchewan. He is also an editor of ActiveHistory.ca.