Cities Beyond Borders brings together a wide array of historians specialized in different cities and world regions. The book’s twelve chapters touch upon the history of urban settings in North America, Europe, and South Asia. It opens with an engaging introduction written by the editors Nicolas Kenny and Rebecca Madgin, who make a compelling case for going beyond the analysis of a single city in urban history. Kenny and Madgin highlight that much scholarship draws on comparative assumptions to begin with. The very notion of a coherent object of analysis called “the city” can only be based on a comparison. It is this inherently comparative aspect of urban history that they seek to address head on, noting that “the chapters gathered here are underpinned by a basic question: how is our understanding of what it has historically meant to live in a city enhanced by a widened lens that encompasses multiple urban settings?” (p. 6). The editors stress that a comparative and transnational perspective on the past of cities also needs to engender reflections about the practice of doing urban history. This relates in particular to the use of comparative categories such as “port cities,” which they see as being at risk of contributing to a “reductive typology of cities.” Kenny and Madgin rather call on scholars to compare also very different cities to each other, which would contribute to new questions and a fuller understanding of the “urban imaginary.”

Three chapters accentuate the analytical potential of urban histories that look beyond a single setting particularly well. In his chapter about suburban development in Bombay at the beginning of the twentieth century, Nikhil Rao shows how connections to cities outside of South Asia shaped Bombay’s history. In their efforts to urbanize the area of Salsette Island, local authorities included not only English town planning legislation, but also took inspiration from German legal codes. The result was a legislation that differed from the one in the metropole and ultimately came to influence town planning in England. Rao thus demonstrates convincingly that transfers, which shaped urban planning in South Asia, did not just evolve along a colonial axis. Neither did urban planning simply diffuse from the metropole to the colony. The exchange of expertise could also go the other way around, while this expertise was infused with connections that lay outside the colony-metropole dichotomy. With this argument, Rao’s chapter on Bombay not only provides a fascinating urban history. It also relates to recent debates about an entangled history of Germany and India, thereby bridging elegantly the gap between the history of cities and global history. 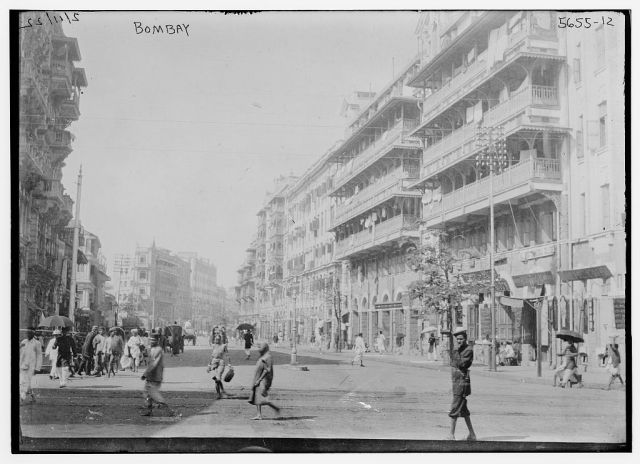 Street scene in Bombay, ca. 1900, from the Library of Congress.

Carl Nightingale offers intriguing conceptual reflections in his chapter about a global history of segregation. Drawing on the research experience from his book Segregation: A Global History of Divided Cities, Nightingale lines out “seven Cs” that came to underpin his analysis: case studies, chronology, causality, commonalities, contrasts, connections, and contingencies. He emphasizes that case studies are indispensable for urban history, as they constitute a particular strength of this field. The consideration of chronology in turn leads to asking questions about the moment when segregation appeared and when it spread. He further demonstrates how a combined analysis of commonalities, contrasts, connections, and contingencies can serve to establish causality. Relating these conceptual reflections to his findings, Nightingale shows how the “seven Cs” revealed pivotal elements of a global history of segregation, including its origins in South Asia and the contingencies that help to explain the marked difference in the history of racial segregation between South Africa and the United States.

In her chapter, Marion Pluskota analyzes the policing of prostitution in Bristol and Nantes between 1750 and 1830. Through a comparison between the two cities, Pluskota illustrates how different scales ranging from the local to the international affected the authorities’ approach to the trade. She shows that the national context played an important part in changes of the municipalities’ practice, as various trends in dealing with prostitution came to Bristol and Nantes by way of the national capitals London and Paris. At the same time, Pluskota makes a convincing case for the pivotal role of local specificities in the two cities, such as a relative autonomy of local administrations, as well as international events that transcended the borders of the nation state, such as the French Revolution. She demonstrates that it is only by looking at the interplay of these different scales that historical research can provide a full understanding of changes in the policing of prostitution in Bristol and Nantes between the middle of the eighteenth and nineteenth centuries.

The book’s other chapters expand on this intriguing kaleidoscope of urban settings, focusing on the histories of cities like Montreal, Dresden, Liverpool, and Philadelphia. This impressive geographical scope offers insights into a multitude of common patterns and transfers that shaped urban history in various localities, thus underscoring the advantages of a comparative perspective on urban history. At the same time, the variety of the book’s chapters also points to the challenge of coherence. Some chapters focus on connections between cities in two neighboring nation-states, others relate to questions of imperial ties, while still others are concerned with processes on a global scale. This diversity of approaches leads to the question: What holds this kind of urban history together, once it has moved beyond a single city, nation-state, or region?

From this perspective, it makes a difference whether historians compare urban settings in two European nation-states, as is the case in Pluskota’s chapter, or whether they follow a specific urban phenomenon wherever it leads, as Nightingale does in his chapter. In the same way, it matters whether scholars focus on the ways in which cities in South Asia shaped the trajectory of contemporary urban change in Europe or whether they take Europe’s and North America’s urban past as a blueprint for later developments in other world regions. Nikhil Rao’s observation about innovations in Bombay affecting town planning in England, for instance, points to a synchronicity of European and South Asian urban history at the beginning of the twentieth century.  Dan Horner’s chapter on Montreal and Liverpool, in contrast, suggests a temporal gap between the urban history of those regions by noting that Montreal and Liverpool faced challenges in the nineteenth century that are similar to those faced by Mumbai, Cairo, or Lima today.

Cities Beyond Borders thus helps in bringing diverging approaches to light. Its theoretical and methodological openness is a strong point of the book. In the introduction, the editors provide intriguing methodological reflections and the individual chapters offer a wide vista on approaches that seek to transcend single-city perspectives on the urban past. Historians can take this vista as an invitation to think about what they precisely aim to do when they write an urban history that is concerned neither with a single city, nor with cities in a single nation-state or region. Here, Conrad’s arguments about global history and the differences between some of the chapters of Cities Beyond Borders suggest that at least three characteristics delimit global from transnational urban history: A concern for potentially global processes, a focus on the synchronicity of urban history in different world regions, and the importance of questions of Eurocentrism.

In a time when global history seems to come under increasing pressure from efforts to re‑nationalize historical research, such questions of specificity and method become ever more important. The historian Andreas Eckert recently argued that efforts to re-nationalize historical research challenge scholars invested in global history to move from highlighting connections, networks, and interactions, to asking more questions about how these interactions worked and where they found their limits. With its strong anchoring in concrete localities, global urban history is ideally suited for this kind of endeavor. To establish global urban history as a coherent field of historical research, however, scholars need to engage in a sustained discussion about its theoretical and methodological foundations.  It is books like Cities Beyond Borders that help opening up this discussion.