Emporia of Cosmopolitanism: A Social History of Early-Twentieth-Century Port Cities in Southeast Asia

There are few recent books as deeply anchored in both global and urban history as Su Lin Lewis’s exploration of urban life in early-twentieth-century Southeast Asian port cities. Combining a keen interest in the consequences of the world’s growing connectedness during the tail end of the age of steam, a thorough familiarity with the places it studies, and painstaking archival research, the book showcases how two subfields of history can be merged to great benefit. While Lewis speaks to recent debates in global history, she successfully eschews the now familiar charge that the field’s practitioners have veered too far from concrete, empirical studies of the local. The elegantly presented results of her research therefore should be read by a wide range of historians. 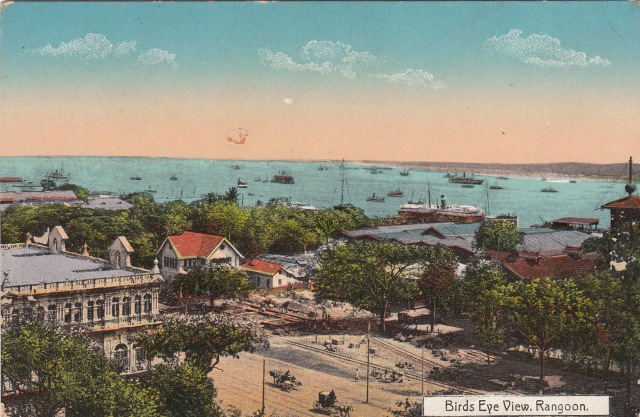 Postcard of Rangoon’s Port in the Early Twentieth Century.

Concentrating on the multi-ethnic port cities Rangoon, Penang, and Bangkok during the interwar decades, the book is for the most part a social and cultural history of their inhabitants, in particular their nascent middle classes. Rather than systematically contrasting the three cities, Lewis treats them together, devoting one chapter each to five overarching topics: urban space, associational life, print media, education, and changing notions of femininity. If the selection of these topics looks arbitrary at first, she lends them coherence by probing each of them with a view to the central concept of “cosmopolitanism.” The driving interest in this concept makes Cities in Motion part of a much larger burgeoning literature on cosmopolitan port cities, which in recent years has been particularly visible for the Eastern Mediterranean and the Middle East.

As a result, the term “cosmopolitanism” carries quite some analytical weight. The author states that she views cosmopolitanism as “a process” (7), but beneath this overarching definition, it seemed to me, lurk at least two distinct phenomena: One is cross-ethnic exchange within the three cities, mostly between Asians of different origins. The other is the globalization of urban ways of life, which in Southeast Asia resembled Westernization. The book’s emphasis gradually shifts from the former towards the latter kind of cosmopolitanism. It is important to note, however, that the two need not go hand in hand. On the contrary, it is perfectly possible to imagine intensifying long-distance connections with an expanding middle class participating in globalized urban lifestyles, all the while a given city’s space becomes increasingly fragmented along lines of ethnicity or class. This is what happened to many North American cities in the early twentieth century.

Lewis excels at shedding light on the globalization of middle-class urban life and habits. Since this was indeed a “process” that accelerated after World War I, it makes perfect sense that the book as a whole concentrates on the 1920s and ‘30s. In this period, Lewis deftly demonstrates, the educational aspirations for middle-class youth and gender roles were increasingly underwritten by global norms and discourses. The book’s marvelous last chapter, focusing on the figure of the modern girl with her characteristically bobbed hair, illustrates this process very persuasively.

Yet the study’s argument is built mainly on the fluidity of ethnic boundaries in urban space, with the aim of “challenging historical narratives that focus on communal division alone” (10). The author takes particular issue with the notion of “plural society,” a term coined by the Burma-based colonial scholar J.S. Furnivall, who by “plural” essentially meant segregated. Critically engaging with Furnivall, Lewis chronicles examples in which communal boundaries were crossed, diluted, or torn down, be it in markets, in boardrooms, or in cinemas. The gist of this argument is well encapsulated both in the book title’s signal word “motion” and in the flickering painting by Burmese artist Sitt Moe Ang, which graces the cover, evoking a restless world in flux.

Cross-ethnic networks and interactions were not new in the 1920s, of course. Chapter 1—an excellent survey of the three cities’ histories since their foundation in the late eighteenth century, which can be recommended for any seminar on global urban history—shows that Southeast Asian emporia had long been ethnic mosaics. Yet the study repeatedly argues that ethnic boundaries softened in the early twentieth century, possibly because of the spread of certain Western middle-class institutions and practices. “Multi-ethnic representation in a shared associational space” (137) through Rotary clubs, philanthropic societies, and freemasonry provide Lewis with examples to make that case. Wherever certain, Western-inspired, patterns of cultural consumption or educational aspirations took hold, so the argument suggests, it mattered less whether you were Thai or Chinese, Hindu, Muslim, or Buddhist.

Employees at Bangkok’s Telephone Exchange Center in the 1930s

Even as the author repeatedly concedes that the three cities were “also sites of racial tension and conflict” (8), the overall emphasis is thus more on “friendships and interactions” (16), unapologetically offering a kind of global history that increasingly finds itself on the back foot these days. This emphasis contradicts not only the late Furnivall, but also some recent global histories of ethnicity in urban space, such as Carl Nightingale’s, which has found rising levels of segregation during the age of high imperialism, including in Southeast Asian cities.

In the absence of globally comparable quantitative data, such as indices of residential or occupational dissimilarity (which Lewis does not provide), it is hard to decide on which side of the argument to come down. Readers unfamiliar with Southeast Asian history will wonder what exactly Lewis’s comparative benchmark is for determining the fluidity of cross-ethnic exchange in her three case studies. The historian of Latin America, for instance, accustomed to setting a lower bar for diagnosing segregation, may not admit the mere existence of multi-ethnic professional associations as evidence against high ethnic barriers.

From the angle of an outsider to the region, then, parts of the book read more like a corrective to a specific strand of the historiography of Southeast Asia, which perhaps dwelled on communal separateness a little too much. Yet even in Southeast Asian terms alone, the book’s insistence on networks, interaction, and flux sometimes makes it hard to see where the homogenizing ethnic nationalism came from that took hold of much of the region after World War II—duly addressed in the book’s epilogue.

While the jury is thus still out about the permeability of ethnic boundaries in Southeast Asian cities, relative to those in other world regions, Su Lin Lewis has done much to advance our understanding of the subject. Her book not only adds to a thin literature, instantly marking it as a standard reference in the twentieth-century history of Rangoon, Bangkok, and Penang. It also demonstrates, like few other recent works, how global and urban history can be combined to produce fruitful new questions and insights about the relationship between globalization and urban space.