Reviewed by Jonathan Hyslop, Colgate University and University of Pretoria

Can Themba was one of the great generation of black South African writers grouped around the renowned 1950s Johannesburg magazine Drum. He had his home in the brutally tough but immensely culturally and politically creative slumland of Sophiatown. Themba once commented that: “Sometimes I think … only Charles Dickens – or perhaps Victor Hugo – could have understood Sophiatown.” South Africa’s cities have been much discussed in recent scholarship but, usually, simply as theatres in which racial conflict took place, and in nationally specific terms. This point of departure has led to an attenuation of thought about these cities as cities. Contestations over South African urban spaces were central to the production of social cleavages and identities. While these battles always crucially interacted with the politics of race, they were not reducible to it. And what contemporary scholarship frequently misses is that historical actors often understood the places in which they lived in a transnational framework of discourses about urbanization and urban life. Themba imagined the city in terms that ranged as far as the worlds of Oliver Twist and Les Misérables.

The achievement of Vivian Bickford-Smith, in his work The Emergence of the South African Metropolis, is to make visible how struggles around the nature of the urban were a factor in the culture and politics of South Africa. Bickford-Smith proposes three suggestive new ways to think about the South African city, focusing on the country’s main centers: Cape Town, Durban, and Johannesburg. Firstly, he looks at what both residents and visitors thought about city life, utilizing a range of print and film sources. He explores how these interventions were produced at the interface of the circulation of ideas and of the authors’ experiences. Secondly, he asks how these circulating perceptions of cities contributed to the construction of identities – especially those of nationality, ethnicity, race, and class. Here, Bickford-Smith suggests that such identities did not just exist in a purely “imagined” realm, but were very definitely spatialized, anchored in particular, local experiences and parochialisms. Thirdly, he suggests that complex relationships between the identity of cities and of their component areas are important to understand. He points out how the ways in which a city – or indeed places within it – are perceived, are crucial to such things as the decisions people make on where to live, tourist development, and investment patterns. Some of this may seem obvious once stated, but these are precisely the issues that tend to get lost once race is regarded as the only starting point for viewing the city, rather than treated as also, in part, an outcome of contestations within urban space. 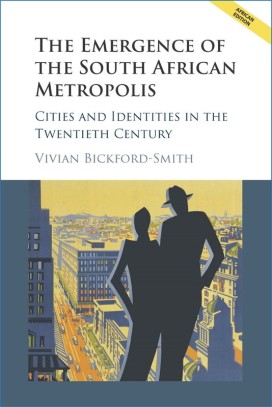 ickford-Smith’s scholarly contribution in this book is remarkable. He covers not only all the best known literary accounts of South African cities, but unearths a treasury of commercial literature, tourist guides, travelogues, pamphlets, and movies. He integrates his highly readable and engaging descriptions and analyses of these cultural products into a strong narrative of the political struggles in South African cities across the twentieth century. And it is here that the real originality of the book lies. While the text is unpretentious at a theoretical level, the author succeeds brilliantly in linking the paths along which representations of the city circulated, to the ways in which state policies were decided on and implemented, social and political identities were brought into being, and social movements and political parties were formed.

Early in the book, Bickford-Smith rightly emphasizes the key role of British-origin political elites in the three cities’ early formation. He documents in rich detail how British immigrants created an institutional landscape of schools, clubs, and other organizations modeled on those of their home country, and how the circulation of people, ideas and commodities from the metropolis, via modern forms of transport and communication, undergirded their sense of British identity. British models of municipal government were very important, with the three cities becoming immensely proud of their municipal identities and services – the latter, of course, largely benefitting whites. Imperial loyalties were fanfared at such grand events as the 1925 visit of the Prince of Wales. But British identity was complex. Early in the twentieth century not only did many non-British origin whites identify with the empire, but many black elites as well. It took a long time for the latter to lose hope in the promise of British justice.

Bickford-Smith’s account of local and imperial responses to these new “British” metropolises is fascinating. Drawing on the work of Raymond Williams, he points out that cities are often thought of as images of the future, and the countryside in terms of images of the past. In a nation as uncertain of its stability as twentieth-century South Africa, representations of the city thus became bound up with claims about the society’s ultimate direction. Bickford-Smith points out that from the turn of the century until the early 1920s, the perceptions of South African cities conveyed in print and film were seldom wholly upbeat. In an era of difficult industrialization, war, and political violence, the best cultural producers could offer was a mixture of optimism about urban achievements, and anxiety about urban problems. Images of British South Africans in print and on celluloid were generally favorable, while black or Afrikaner characters were more likely to be portrayed in a hostile manner. The presentation of the city as a source of moral danger was widespread, as was the idea that the city “spoiled” the pure rural African. Afrikaner nationalist literature played on the familiar rightist tropes of farm life as the source of a healthy volk, and the tragic fate of innocent rural youth corrupted by the cosmopolitan city (in a discourse often tinged with anti-Semitism). Bickford-Smith connects the extreme racism expressed in the paranoid literature of such works as George Hardy’s Black Peril (1914), and films like Sold to the Malays (1915), to the similar ideology found in important urban political developments, such as the various municipal policy debates which linked issues of epidemic disease to the “need” for segregation.

Central Johannesburg in the 1950s

As Bickford-Smith shows, southern African cities had received somewhat mixed reviews in the travel writings of such literary luminaries as Anthony Trollope and Mark Twain. This perhaps fed into the self-doubts of local urban white communities at the turn of the century. But settler colonial society became increasingly confident in presenting its urban achievements and modernity to the world in the 1920s and 1930s. The book has an outstanding section on the marketing of South Africa to both international audiences and its own white population in this period, especially through film. This publicity offensive went hand in hand with the development of a tourist infrastructure and the shaping of white, elite areas through urban planning influenced by the British “Garden City” movement. The book has a fascinating discussion of how the three cities’ publicity associations represented their “metropolises,” and of the use of film and photography by the railways in their campaign to attract tourists. He also shows how black workers and activists elaborated their own critical discourses of urban life, within especially the genres of popular song and political publications, building powerful critiques of the experience of a harsh urbanization and of segregationist practices. But he points out that black journalists and literary intellectuals remained rather cautious in their discussions of urban life well into the 1940s. The hope of gradual progress had not entirely died out amongst these elites.

All of this changed with the implementation of apartheid by the Afrikaner National Party government in 1948. The extreme right’s seizure of power took place in the wake of a massive wave of African urbanization, which had been accompanied by housing shortages, labor and community militancy, and white backlash. The pursuit of a draconian racist policy at exactly the moment when the rest of the world was turning to decolonization and desegregation marked South Africa out as an aberrant political formation. Bickford-Smith has an excellent section on how Alan Paton’s 1948 bestselling novel Cry the Beloved Country (and the 1951 Zoltan Korda film of it), framed the discussion of the South African future for both national and international audiences. Cry was largely a book about urbanization. Critical of racial inequality and injustice, it was also carried on the literary tradition of hostility to the city, and called for political patience in a way which was to infuriate black militants. However, coming at the moment it did, just before the opening of the massive political resistance of the early 1950s led by the likes of the young Oliver Tambo and Nelson Mandela, it dramatized the South African struggle for huge worldwide audiences. The book was the forerunner of a series of internationally produced books and films from the 1950s attacking the South African social order, which the author usefully surveys. Here, he discusses especially the academic critics of social conditions, and the Drum writers of the 1950s. What however is genuinely exciting and original about what Bickford-Smith does, is that he reframes these authors as writers of the urban. Without in any way diminishing their critique of apartheid, he enables us to see a richness and complexity of thought about urban spaces and places in these works that we might otherwise not recognize.

The book ends with a chapter surveying later print and film representations of South African cities in a way that is all too tantalizing – hopefully the author will give us more on this in work to come. But this work is a real contribution not only to the historical literature on South Africa, but also to that on the modern city. It is an original, incisive and impressively erudite account of the politics of discursive struggles around urbanism and urbanization. This is a book that can be recommended not just to South Africanists, but to all who are interested in these questions.

Jonathan Hyslop is Director of Peace and Conflict Studies at Colgate University and Extraordinary Professor at the University of Pretoria, He has published widely on southern African social history. His current research focuses on maritime labor in the steamship era. Recent articles on this theme have appeared in periodicals including Journal of Transport History and Journal of Imperial and Commonwealth History.