Rangoon and Singapore: Connections, Comparisons, and the Construction of Southeast Asian Cities

November’s parliamentary elections in Myanmar have contributed to a sense of cautious optimism not only on the ground, but also amongst academics studying the Southeast Asian nation’s rich and complex history and society. While academic research in the country was heavily restricted for decades under the country’s ruling military junta, a recent loosening of immigration laws and state control has sparked renewed interest in Burma studies. In this light, studying Myanmar’s largest city, Yangon (also known as Rangoon), has become not only possible, but also increasingly productive for historians connecting the city to both South and Southeast Asia like Sunil Amrith, Nile Green, Su Lin Lewis and Jonathan Saha. 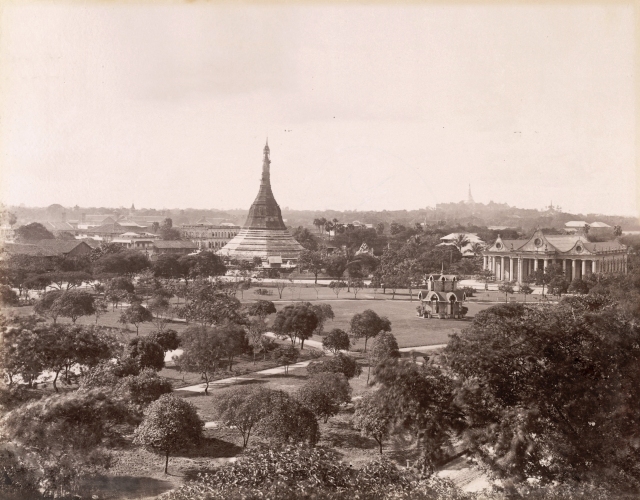 Fytche Square, Rangoon during the 1890s.

With a research interest in Asian urbanisms across the Indian Ocean world, I too have been a beneficiary of these loosening restrictions. Thanks to the support of The History Project and INET, I traveled to Yangon during July and August 2015 to conduct research at the National Archives of Myanmar. Along the lines of my research and the lines of recent historical scholarship on Burma, this post connects Rangoon in another way to South and Southeast Asia – namely through the city’s history of urban planning and development. While there are certainly connections between Rangoon and other urban centers across the Indian Ocean, I will focus here on Rangoon’s connections to Singapore. In examining this particular connection, this post aims both to add to the new body of scholarship connecting Burma to the Indian Ocean world and to tie issues facing Yangon’s contemporary development to the city’s historical development over the nineteenth and twentieth centuries.

Despite similar population sizes, shared histories of urban planning, and a regional geography connecting them, Rangoon and Singapore have hardly been considered together as case studies in urban development. Though Singapore, particularly after beginning its journey as an independent city-state in 1965, has been the repeated focus of scholarly inquiries into urban development and planning, Rangoon has largely been left out of scholarly discussions. These cities’ shared history of British imperialism, their diverse – or perhaps ‘plural’ – demography resulting from migrations during the imperial era, their shared tropical climate, and their geography all help to justify this historical juxtaposition.[i] 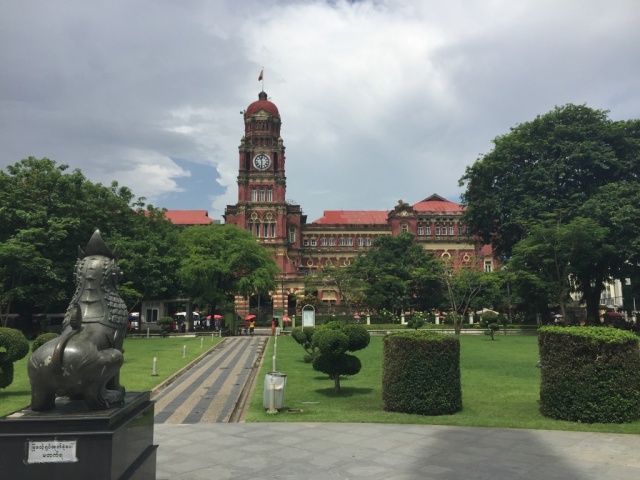 A view of the High Court building from the Maha Bandoola Garden in downtown Yangon, July 2015.

Beyond macro level comparisons, the development of town plans for each city during the early to mid-nineteenth century helps to draw a more local example of connection between Rangoon and Singapore. While modern Singapore was founded as an imperial outpost prior to Rangoon in 1819, and was therefore built up before Rangoon was acquired in 1852, both towns reflect the planning and influence of Dr William Montgomerie. A surgeon who came to Rangoon in 1852 as part of the second Anglo-Burmese war effort, Montgomerie was both a member of Singapore’s Town Committee and an architect, so to speak, of downtown Rangoon’s checkerboard. Appointed by Sir Stamford Raffles as both a member of and the Secretary for the Town Committee in Singapore, Montgomerie helped plan for the growing city. After moving to Rangoon, he similarly helped plan – submitting memoranda about urban planning and helping to frame Hugh Fraser’s iconic checkerboard layout for downtown Rangoon.[ii] While Singapore’s streets and blocks are not a perfect checkerboard like those of downtown Rangoon, an urban design based around the waterfront characterized both nineteenth century cityscapes. In the two cities, important municipal buildings dominated the waterfront – in Singapore’s case these buildings now dominate what was the waterfront prior to modern reclamations – and a compact grid of street blocks moving inland shaped both landscapes. This connection of urban planning in Rangoon and Singapore suggests the emergence of a distinct built environment in cities across the Indian Ocean and particularly in Southeast Asia during the middle of the nineteenth century.

While Rangoon and Singapore therefore shared connections in approaches to town planning from the nineteenth century, the early twentieth century served to bring the planning of each city’s urban environment into closer conversation. The institutional mechanism through which this was achieved was the model of the improvement trust. Inspired by the creation of the Bombay Improvement Trust in 1898, the Rangoon Development Trust was founded in 1920 and the Singapore Improvement Trust in 1927. Focused on remaking these cities along new lines of research in sanitation, public health, and town planning, these improvement trusts tended to advocate for the widening of streets and for land reclamation projects in addition to pushing for the construction of public housing for the poor as well as the construction of municipal waste and water systems. With Bombay continuing to be an inspiration for both cities prior to the Second World War, the city informed debates in both Rangoon and Singapore about improving the living conditions of each city’s poorest residents. Works like Robert Home’s Of Planting and Planning have in the past focused on the formations of institutions, like the improvement trusts, in colonial cities as mechanisms through which common regulatory regimes and management policies were constructed. However, substantiating connections between urban planners and their improvement trusts remains unexamined. 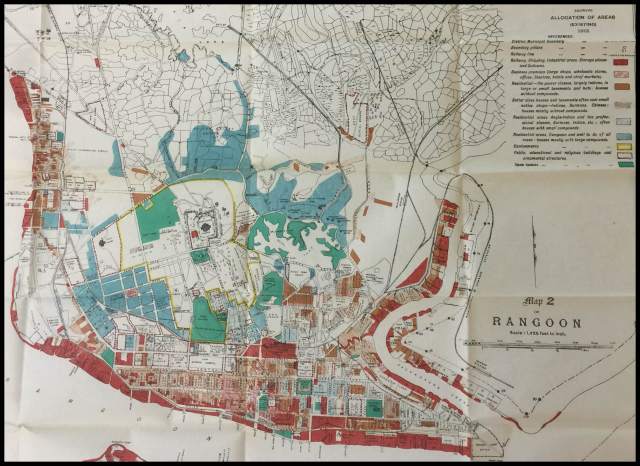 A 1915 map of Rangoon indicating the socio-economic divisions in the city. Source: The British Library Board, IOR/V/26/780/12 (Map of Rangoon).

Telling, for example, is the connection made between Rangoon and Singapore in a 1926 report on the public health of Rangoon. In rejecting the need for anti-malarial improvement works in Rangoon, the report follows and examines improvements made in Singapore to fight malaria. Noting that Singapore was almost exactly the same as Rangoon, the authors of the report utilize Singapore as the main point of comparison to argue that malaria was not sufficiently problematic enough in Rangoon to warrant government expenditure. While this comparison was made before the political decolonization that followed the conclusion of the Second World War, comparisons like these continued after the war as well. In examining ways to approach the problem of growing slums and increasing squatter populations in post-war Rangoon, authorities at the Rangoon Development Trust turned to Singapore again as a point of comparison. Including as an annex a Singapore Housing Committee report, the Burmese authorities noted in their own report on the post-war housing situation in Rangoon the costs per head of constructing tenements in Singaporean dollars. In then converting those dollar figures to figures denominated in 1950s Burmese kyat, the Rangoon Development Trust report goes a long way in demonstrating that development in Singapore influenced debates and actions about how to plan and rebuild Rangoon after the war. In this way, the case of Singapore proved to be an important influence on municipal and central government authorities looking to develop and then rebuild Rangoon before and after the Second World War.

While urban development in contemporary Yangon and Singapore has diverged significantly, Singapore continues to be a source of inspiration and point of comparison to developers, planners, and urban heritage advocates in Yangon. After all, the cities remain similar in size in terms of population and are increasingly geopolitically linked through ASEAN despite a large gap in per capita income. The Yangon Heritage Trust, a group of urban heritage advocates in Yangon, has pointed specially to Singapore’s mistake of destroying much of the colonial architecture while developing the city. In using the case of Singapore, the YHT argues that Yangon could become ‘one of the most beautiful and liveable cities in Asia’ if it properly preserves its urban heritage. Dr Thant Myint-U, a historian of Burma and the founder of the YHT, is perhaps uniquely positioned to appreciate Yangon’s historical connections relating to urban planning as well as the city’s future development.

Throughout much of the nineteenth and twentieth centuries, the twin forces of urban planning and development have often tended towards a convergence of the urban landscapes of Rangoon and Singapore. These forces have also contributed to the emergence of a distinct built environment of Southeast Asian cities. As the new government in Naypyidaw, Myanmar’s capital, looks to redevelop and modernize its largest city, it is not unlikely that the contemporary development of Yangon will once more draw on the city’s historical connections to the many urban nodes along the Indian Ocean, particularly its connections to Singapore. In this way, Yangon could construct a renewed kind of Southeast Asian city centred not only on glass and steel, but also on a shared history.

Michael Sugarman is a PhD candidate in History at the University of Cambridge. He is a Prize Research Student at the Centre for History and Economics and is currently working on a dissertation analyzing the role of public housing in wider urban redevelopment schemes in early twentieth century South and Southeast Asian port cities.