On a Sunday at the end of January 1863 groups of sheikhs, notables, merchants, consuls, and soldiers gathered in the Citadel of Cairo. They came to witness a crucial event: the reading aloud of the imperial firman that affirmed the governorship of Ismail Pasha over the rich province of Egypt. The firman was brought by the Ottoman sultan’s imperial envoy. After the announcement, which occurred, of course, in Ottoman Turkish, Ismail held a reception. Local Turkic notables and army leaders came to congratulate and express their loyalty. A few months later, in April 1863, they received Sultan Abdülaziz in person in Alexandria—something that had not occurred since the Ottomans occupied Egypt in the sixteenth century. From Alexandria the sultan took the train to Cairo. This was the first trip of a caliph on the tracks.

The Fountain of the Valide (the mother of the khedive), between 1867 and 1890, by Maison Bonfils, Library of Congress.

But what did Ottoman mean exactly in Egypt? My forthcoming book, Arab Patriotism: The Ideology and Culture of Power in Late Ottoman Egypt, examines the significance and meaning of the Ottoman imperial context for the history of Egyptian nationalism. The book demonstrates the continuous negotiation between Turkic elites in Egypt and local intellectuals and notables bound by collective, albeit contested, notions of patriotism. There was an invisible compromise through the new representations and techniques of power, including the theater. This local instrumentalization and mixing of urban Muslim and European forms is the backstory to new political communities in the Middle East. Importantly, the Ottoman connection was an urban one: imperial elites are urban elites and rural elites had to become urban ones in order to maximize their interests by the fin-de-siècle.

So, what does the Ottoman framework mean for urban historians of the Arab world and in particular of Egypt? Such a framework does two important things: as Ehud Toledano underlines, it points to the delegated power of the governors by the sultan; and it reveals that new (elite) consumption practices and technologies spread not only by direct contact between local and European actors but also by the imperial mediation of Istanbul, or vice versa, by local provincial mediation to the capital. The Ottoman Empire guaranteed the network of free and safe trade, and movement between cities still in the nineteenth century. These basic features of the Ottoman context remained in place even after the British occupation of Egypt until 1914.

Such a perspective does not diminish the factual power of European empires and their military interventionism to protect their economic interests. On Barak eminently showed that the first train line in Egypt was crucial for British rule in India in the 1850s. European technologies and new sources of energy (coal, electricity) also helped the Ottomans to reach their far-flung domains quickly (remember the sultan arrived via train in Cairo). These instances, however, do not mean that the sultan’s (or his representatives’) power was usurped by Europeans completely until the 1870s. “Bringing the Ottomans back in” destabilizes the bifurcated view of West and East by highlighting a plural system of power just before the scramble for Africa.

We should not read “Ottoman” as “old” in contrast to the European “new.” This is the exciting moment of the Tanzimat reforms in the Ottoman Empire, in which new technologies were “Ottomanized” to a certain extent, next to legal changes. There was an Ottoman elite modernity representing novelty to the provincial populations which had milliard connections to bourgeois practices globally.

Interior of the Mosque of Silahdar Agha, picture by the author.

In the context of nineteenth-century Cairo, the most aesthetic representations of power were often formulated in terms of Ottoman sovereignty—a sovereignty that the pashas of Egypt wished to renounce but never did. Among these Ottoman features, one can see the mosque of Mehmed Ali in the Citadel. Doris Behrens-Abuseif reminds us that this mosque represents both Mehmed Ali’s power and Ottoman imperial aesthetics. It dominates the city’s skyline to this day. The pasha’s military elite brought late Ottoman baroque to Cairo: just look at the mosque of Sulayman Silahdar Agha in al-Mu‘izz Street and other smaller Ottoman mosques, schools, fountains, and palaces around the city. Though featuring local characteristics (“the Egyptian dialect of Ottoman architecture”), these structures are unmistakably Istanbulite and were built prior to or in the 1870s. A particularly interesting interplay between Ottoman and European aesthetics, hygienic considerations, and capitalism occurred in the creation of various public and private gardens in nineteenth-century Cairo and Alexandria. Buildings of power such as the Abdin Palace were likely conceived in a competition with the Ottoman capital (there the Dolmabahçe Palace was new in the 1850s) restaging political representation in a “modern” architectural idiom.

Socially, there are some who understand the Ottoman presence in Cairo (and in Egypt in general) as “The Turks in Egypt,” to quote the useful but somewhat misleading publication title of Ekmeleddin Ihsanoğlu. There were certainly ethnic Turks in Ottoman Egypt. The local population looked at the quite cruel Ottoman military ruling class as the “Turks” (al-Atrāk). Yet, in nineteenth- and early twentieth-century Cairo, there were many Ottoman Armenian, Greek, Jewish, Albanian, Bulgarian, and Circassian families whose primary or secondary language was some version of Turkish and who had family or economic ties to various Ottoman cities in Asia and Europe. Their leading members rapidly transformed themselves into Franco- and Italophone “cultural creoles” (to use Julia Clancy-Smith’s expression), who forged new identities precisely by distancing themselves from their Ottoman past. Another identity strategy, not necessary exclusive of the previous one, was nationalism. 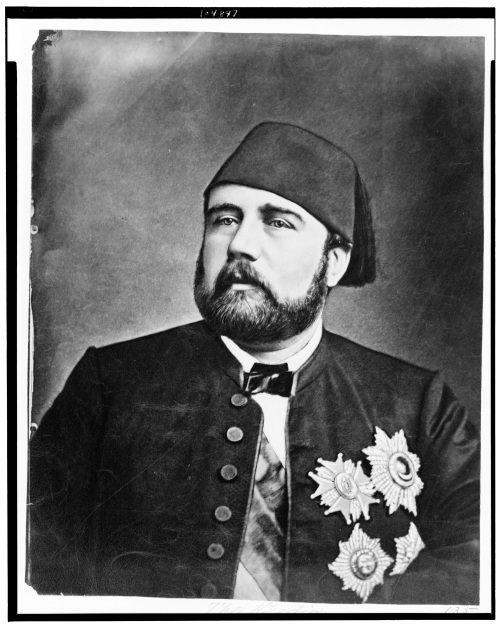 The Cairo Ottoman elite was connected to Istanbul and was part of the imperial order. There was an elite Ottoman global network. The rulers, their families, and various relatives lived in both cities (later in Paris and in Switzerland). Every day, orders, secret reports, gifts, and personal staff arrived from Istanbul in Alexandria to be transported to Cairo and vice versa. From the 1860s onwards, this political and leisure traffic was facilitated by the Aziziya steamship company. The landowning-ruling households developed significant economic investments in between both cities, not to mention the large yearly tribute Egypt paid to the sultanic treasury. Ottoman treaties applied to Egypt to a significant extent. In the 1860s, as Nicolas Michel argues, the Ottoman Empire not only remained skeptical of the Suez Canal, but actually intervened in its construction. Ismail Pasha himself is usually remembered for the Suez Canal opening ceremony and associated follies which led to foreign control of Egyptian finances. He was, however, also an Ottoman man, part of the imperial elite and intimately familiar with Istanbul where he lived and where he eventually died. His mother, Hoşyar, who maintained a full Ottoman cultural elite household, invested significantly in the Muslim landscape of Cairo. Last but not least, one should not forget that the Ottoman sultan’s firman was the legal basis of the pashas’ rule.

There was also an invisible Ottoman underworld in Egypt. Sufis orders, especially in Cairo, had spiritual and material significance in Istanbul. Musicians and entertainers travelled between the two rich centers and other cities. Religious endowments (sing. waqf) in Cairo were related to Istanbul in many ways, going back to the sixteenth century. Religious scholars often received a salary from the sultan or from the Sheikh-ül-Islam. Small merchant networks fully functioned between Egypt, the Syrian provinces, and Tunis. Shari‘a court cases from Cairo could sometimes even reach the Istanbul courts. The question of religious endowments in Egypt belonging to individuals in republican Turkey remained a complex problem until the 1950s. Merchants living in Istanbul and in other parts of the empire had significant investments in Cairo and vice versa. Likewise, criminals circulated (and sometimes escaped) between Istanbul and Cairo. Al-Qanun al-Sultani, the “Sultanic Law,” was the basis of the penal system in Egypt, though the governor wanted the right of death penalty for himself in the 1850s. Political dissidents also commuted between the two cities (scholars are yet to properly explore the use of fin-de-siècle Cairo as an Ottoman hub of anti-Abdülhamidian propaganda). The khedives and the sultans used various figures in the capitals to keep each other at bay.

The often-romanticized bourgeois society of Alexandria was in large part a semi-Ottoman society, which had its less spectacular but perhaps even more powerful sister-groups in Cairo. The ministries in Cairo received the French, Arabic, and Turkish newspapers printed in Istanbul until the 1880s. Armenian refugees arrived in Egypt in large numbers. Egyptians were legally Ottoman citizens until the First World War.  Even in the 1920s there were (Ottoman) Turkish newspapers printed in Cairo.

The British occupation did not reduce the Istanbul-Cairo traffic. Egypt and its capital Cairo remained both a cultural and financial market for Ottomans—from the Ottoman musical theater brought by enterprising Turkish-speaking Armenians, to clothing and other products.  Indeed, the occupation arguably boosted the symbolic Ottoman presence by the arrival of an Ottoman Imperial High Commissioner (the war hero Muhtar Pasha) in Cairo in 1885. Ottoman flags symbolized Egypt’s belonging and resistance in the 1890s. Some argue this was a mere instrumentalization of the Ottoman Empire because Egyptian anti-colonial mass nationalism had already bloomed, clamoring for an independent nation-state.

The urban nature of these dynamics and relations cannot be overemphasized. Rural Egyptians rarely identified with the empire. Outside the cities, “the Turks” meant taxation, conscription in the army, misuse of power, and pashas and beys with legal privileges. Until the nineteenth century, peasants could apply for justice to the distant sultan as his subjects by way of petitions, but the Mehmed Ali family, by assuming legislative powers, blocked this unique means of connection between the poorest and the highest.

The provincial system of the late Ottoman Empire was torn between centralization, local concerns, and integration into global infrastructures, as Johann Büssow, Christoph Herzog, On Barak, Toufoul Abou-Hodeib, and Till Grallert have recently shown on the examples of Ottoman Palestine, Iraq, Egypt, Lebanon and Syria, respectively. It was up to local elite activity to shape whether the processes of urbanization and capitalism were to be paired with imperial initiatives as negotiations played out in the European imperial context.

Adam Mestyan is a historian of the Middle East. At the moment, he is an assistant professor at the History Department of Duke University and a Foreign Research Fellow (membre scientifique à titre étranger) at the French Institute of Oriental Archeology – Cairo (Institut français d’archéologie orientale – Le Caire). Previously, he taught at Oxford University and held fellowships at Harvard University and at the Wissenschaftskolleg zu Berlin. His first monograph, Arab Patriotism – The Ideology and Culture of Power in Late Ottoman Egypt, presents the essential backstory to the formation of the modern nation-state in the Middle East (Princeton University Press, 2017; available also at Amazon).